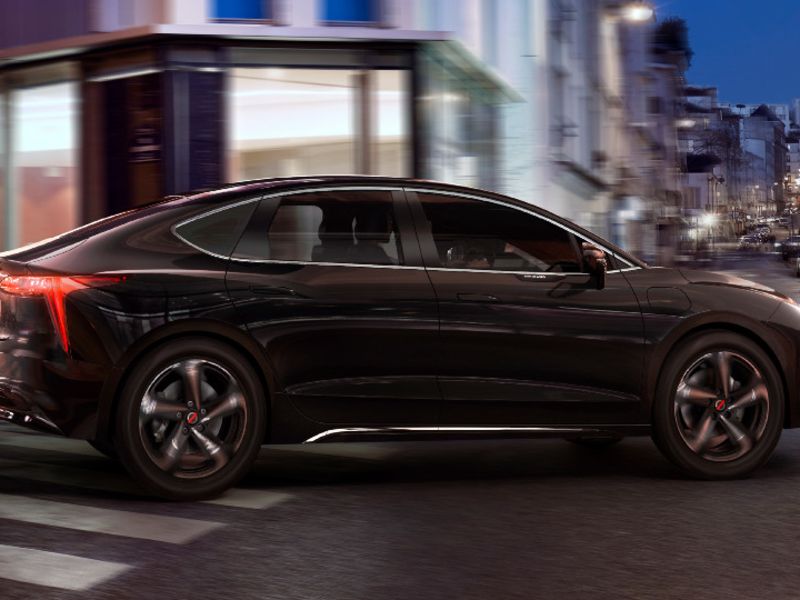 MUNICH – Renault’s Mobilize mobility services unit will roll out production versions of its purpose-built vehicles in 2022, starting with the Limo, a Chinese-built midsize electric sedan for ride-hailing and taxi companies.

The Limo had its public debut this week at the Munich motor show, where it was displayed alongside prototype versions of the Hippo, an electric “last mile” cargo van; the Duo, an electric quadricycle for urban mobility that uses some components from the Renault Twizy; and the Bento, a cargo version of the Duo.

Mobilize CEO Clotilde Delbos, who is also Renault Group CFO and deputy CEO, said it made more sense to use a vehicle developed for the Chinese market, where midsize sedans remain popular, for ride-hailing and taxi use, rather than adapt a European model from Renault or Dacia.

The Limo was developed by Renault’s joint venture partner Jingliang Motors Group in China, where it is known as the EZoom Yi.

“We chose this specific model and not a Renault because ride hailing services customers are asking for a sedan as a perfect vehicle for this type of use,” Delbos told Automotive News Europe this week. “This architecture is still strong in China and Turkey, but no longer in Europe, where the market is oriented to SUVs and crossovers.”

A fleet of 40 Mobilize Limos will enter service in various ride-hailing and taxi companies in the second half of 2022, Mobilize said in a news release.

Renault will offer a package of services for the Limo that includes warranties, maintenance, insurance and charging options. Financing will be managed by RCI Bank, the automaker’s financial-services arm. Ride-hailing services can arrange contracts based on mileage or duration, while casual drivers can pay as they go, Renault said.

Mobilize vehicles will not be available to private buyers, Renault says. Jean-Christophe Labarre, head of strategy and partnerships at Mobilize, said in an interview that the vehicles were key to the unit’s success.

“They are really at the core of Mobilize because those cars are needed to power the mobility services,” he told ANE.

CEO Luca de Meo says that Mobilize will account for 20 percent of Renault Group’s turnover by 2030. He created the unit in 2020 as part of his Renaulution plan to revive the money-losing automaker. The unit includes services as diverse as battery “second life,” recycling, ride-hailing, data and an array of partnerships.

Renault’s mobility services generated 11 million euros in revenue in the first half of 2021, according to group financial filings.

The automaker is hoping to use the Limo to capture a share of Europe’s ride-hailing market, which it says will grow from 28 billion euros ($33 billion) today to 50 billion euros in 2030.

“Duo and Bento are not show cars but two prototypes nearly ready for production,” Mobilize head of design Patrick Lecharpy said. Some of the electric vehicles’ components come from the Renault Twizy electric quadricycle, which has been in production for nearly a decade.

The two vehicles aim to incorporate 50 percent recycled materials in their manufacturing and be 95 percent recyclable at the end of their life cycle, Renault Group said. Renault did not say where the vehicles would be built; the Twizy is currently assembled at Renault Group’s factory in Busan, South Korea, although earlier versions were built in Spain. https://europe.autonews.com/blogs/renault-twizy-gets-new-life-korea-motorcycle-replacement

The Hippo remains in concept form, and a date for its debut as a production model has not been announced. “This is the most interesting vehicle in the fleet but also the most challenging business case. That’s why we need a little more time,” Delbos said.