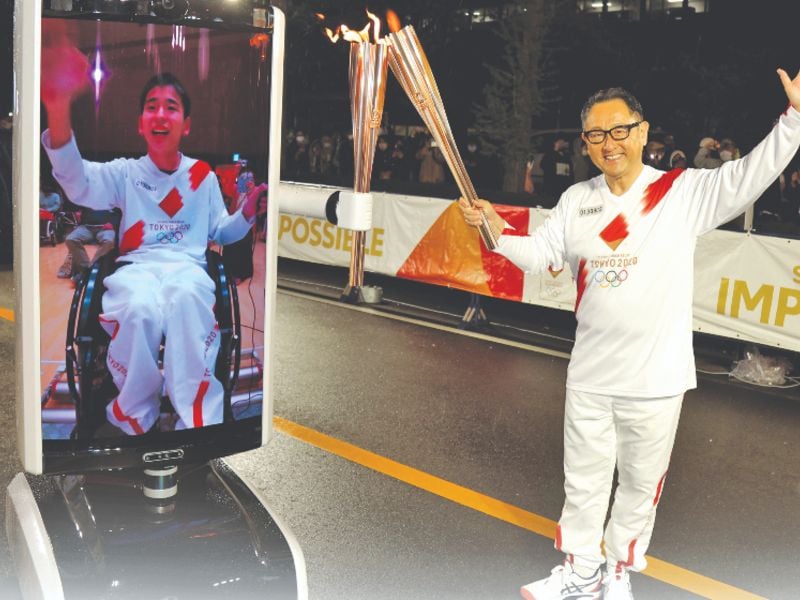 TOKYO — It seemed like sure- fire marketing magic when Toyota became a top sponsor of the Olympics after the home country was tapped to host the 2020 Summer Games in Tokyo.

But then the pandemic pushed the global athletic competition into 2021. And then, a new COVID- 19 state of emergency was declared in Tokyo less than two weeks before the Friday, July 23, opening ceremony. Organizers have barred spectators from nearly all sporting events.

Now, Toyota has canceled all marketing and media events connected to the Olympics. The global sponsor won’t air any advertisements with Olympic tie-ins in Japan. And President Akio Toyoda, who made a cameo in the torch relay, even bowed out of the opening ceremony.

In making its big bet on the Games, Toyota Motor Corp. seems to have rolled snake eyes. Still, all might not be lost for the automaker.

Several of the vehicles and robots Toyota developed to showcase at the Olympics are scheduled to debut. And Toyota’s gadgetry likely won’t go unnoticed by athletes and team members in town for the Games — or even perhaps by sharp-eyed people watching from home.

Early off the line was Toyota’s LQ all-electric pod car, which functioned as the official torch-relay escort vehicle. It is a self-driving vehicle equipped with a digital assistant designed to deliver a “personalized mobility experience.” The car builds on the Concept-I exhibited in 2017 at CES in Las Vegas. Toyota had planned to have a working version of the LQ ready for public test drives. But the pandemic crashed those ambitions. Toyota supplied two LQs to the Olympics.

Also deployed for the torch relay was Toyota’s T-TR2 robot, an update of the T-TR1 shown in 2019. A remote-location communication, or “tele-presence” robot, it resembles an oversized upright vacuum cleaner with a tall vertical display screen instead of a dust bag.

It beams a life-size, real-time video of a person unable to attend the Games onto the screen, and the robot roams the Olympic venues so the person can participate virtually. T-TR2 allowed a Japanese high school student who uses a wheelchair to participate virtually in the torch relay.

Taking the field in the Games themselves is the FSR, short for “field support robot.” This pint-sized runabout is being deployed at such events as the javelin, discus and hammer throw. The four-wheeled FSR, about the size and shape of a tailgate cooler box, will scamper onto the field and take the thrown object back to the thrower’s circle.

The FSR showcases the integration of lidar, camera and GPS technology to pilot the roaming robot back to base autonomously, similar to a self-driving vehicle.

The Olympics also plan to make use of a small fleet of Toyota e-Palettes. These autonomous boxcar-like people movers will shuttle up to 20 passengers each around the Olympic Village. Organizers say they have 17 on hand. Toyota also has offered about 475 of its Mirai hydrogen fuel cell sedans to usher people between sporting venues.

Also on call are about 200 Accessible People Movers. Toyota designed these all-electric, low-speed covered carts to shuttle officials and athletes around Olympic sites.

Once at the venues, people can also zoom around in Toyota’s so-called “walking-area BEVs.” These include standing tricycles, sitting-type scooters and mini-tugs that hook up to wheelchairs and pull them along. Toyota has said these battery-powered runabouts would have a range of at least 6 miles.

Two Toyota gadgets that won’t be deployed are the DSR, short for delivery support robot, and the HSR, or human support robot. Both were proposed back in 2019 before the world had ever heard of COVID-19. The DSR was envisioned for transporting items and collecting garbage. The HSR was designed to take guests to their seats or distribute refreshments to spectators.

But with no one in the stands, these robots found themselves out of work.

Still, organizers hope that spectators will be permitted to attend the Paralympic Games, which open in the Japanese capital on Aug. 24, after Tokyo’s current state of emergency ends. In that case, the HSRs and DSRs could be deployed at the Olympic Stadium to help salvage some of Toyota’s high-tech robotic luster while also playing host to fans.