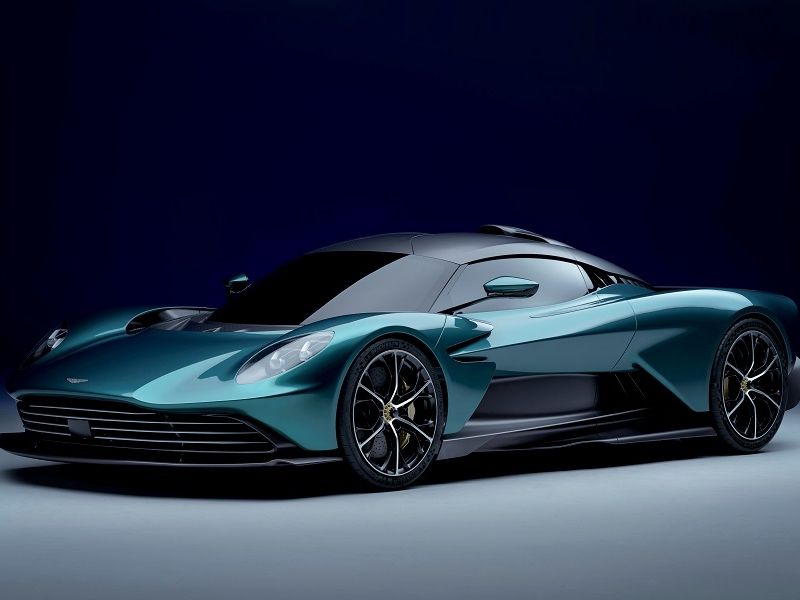 The Valhalla is the second of three mid-engine models Aston Martin has promised as it shifts into segments long dominated by Ferrari.

Deliveries of the delayed Valkyrie are planned to start September this year, with a lower-priced mid-engine supercar called Vanquish also in the pipeline.

The Valhalla uses a V8 plug-in hybrid drivetrain sourced from Mercedes-AMG that mates a 4.0-liter twin-turbocharged engine with two electric motors, one for each axle. It has an eight-speed dual-clutch transmission.

Valhalla deliveries are expected to begin in 2023.

The Valhalla was first revealed as the AM-RB 003 concept at the 2019 Geneva auto show and had been slated to use a V6 hybrid of Aston Martin’s own design.

Along with the engine switch, the car’s design has also changed.

The link to the more extreme Valkyrie model is still seen in Valhalla’s bubble shaped canopy sitting low in the body and also in the bodywork openings, but the grille has now been filled in with Aston’s signature horizontal strakes.

“The execution has evolved considerably in order to reach production of this all-new car,” Aston Martin head of design Marek Reichman said in the statement. “Valhalla is now a more mature, fully resolved piece of design.”

The interior is larger than the Valkyrie’s, but the driver still reclines in the manner of a Formula One driver.

Adjustable pedals and an adjustable steering column allow the seat bases to be fixed to the chassis structure.

The Valhalla is designed around a carbon-fiber tub that keeps dry weight down to below 3,417 pounds (1,550 kg) and also aids handling due to the stiffness of the material.

The suspension at the front is a push-rod style using inboard springs and dampers that reduces the unsprung weight. A track mode stiffens the suspension and lowers the car to help with downforce. In city driving an axle lift system raises the nose to allow it to drive over obstacles such as speed bumps.

The aerodynamic system is designed to maximize the airflow under the car to avoid the need for a big wing.

The resulting bodywork with its dramatic intakes and vents retains a clean profile that Aston Martin says, “blends function and beauty in a manner that befits a new generation of mid-engined supercar.”

The interior is said to be driver focused but Aston Martin has decided to add a touchscreen in place of a holder for the driver’s smartphone seen in the AM-RB 003 concept.

The weight saving measure was cited by former CEO Andy Palmer as one inspired by Red Bull’s chief engineer, Adrian Newey, who worked with Aston Martin on the design of the Valkyrie and the original Valhalla concept. The co-operation with Red Bull was no longer mentioned in the release for the production model.

Aston Martin included these systems “in order to comply with the latest regulatory requirements” it said.

Aston Martin has promised that by 2024 every four or fifth car it sells will be electrified.

Along with the Valhalla, a plug-in hybrid version of the DBX SUV will go on sale in 2023.

Aston Martin has been able to move on its electrification plans after Daimler agreed last year to share more of its technology in exchange for a 20 percent stake in the company, up from 2.3 percent.