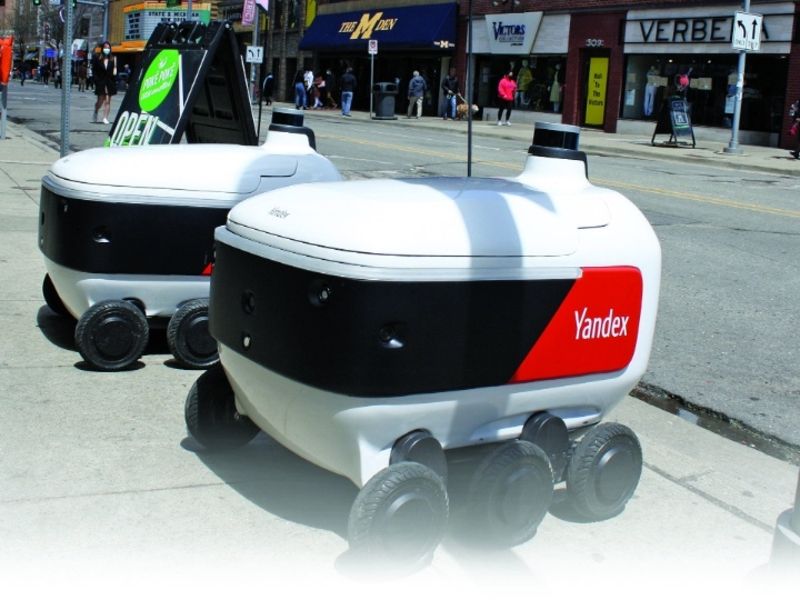 ANN ARBOR, Mich. — On a recent Friday afternoon, a delivery robot made its way along a crowded sidewalk on State Street. It made an abrupt stop in front of Amer’s Deli, spun itself 90 degrees and backed into a parking space with the precise movements of a Revolutionary War soldier.

Some passersby were taken aback by the sight. Others walked right past. One oblivious deli customer used the parked robot as her personal table, then left her empty water bottle on its lid.

“Somebody sat on one the other day,” said Pavel Vorobev, head of products for the self-driving division of Russian tech company Yandex, which deployed four of its Rover delivery bots in Ann Arbor last month.

How pedestrians and diners treat the robots is one thing he cannot control. How the robots treat them? That’s very much in his purview, and part of what Yandex is hoping to learn from its operations in the heart of this college town.

Yandex has partnered with Amer’s Deli to deliver food with the Rovers, six-wheeled delivery bots that weigh about 150 pounds and are large enough to carry the equivalent of five large pizzas. By fall, the company anticipates adding more restaurants to its delivery offerings here.

Ramping up those operations this spring is not as arduous as starting from scratch, Vorobev says, in part because Yandex already has self-driving test vehicles on Ann Arbor roads. The company deployed seven of its Hyundai Sonata test vehicles last year, and the self-driving software that underpins those operations on streets is the same basic software stack used by the Rovers on the sidewalk.

Such flexibility is perhaps unusual across the industry. Waymo and Aurora have showcased their self-driving systems on both passenger cars and Class 8 trucks. Yandex is perhaps the first to take a system initially built for passenger vehicles and tailor it for use in delivery vehicles.

As a result, the delivery business represents a growing part of the company’s self-driving ambitions. The company launched the Rovers, which are equipped with four cameras and one lidar sensor, in Skolkovo, a suburb of Moscow, in April 2020 as the pandemic struck. To date, they have made more than 7,000 deliveries in Skolkovo and Innopolis. They can be equipped with special snow tires to operate in harsh weather.

“Delivery is the starting point,” Vorobev said. “Especially now that people are counting on delivery more and more, and we can do contactless delivery.”

Yandex is not alone in eyeing the increased consumer interest in delivery services during the pandemic, and in choosing Ann Arbor as an early testbed. A Michigan startup, Refraction AI, has been testing a fleet of delivery robots in the city while making deliveries for a local grocery store.

There are key differences: The Refraction three-wheeled REV-1 vehicles utilize bike lanes and travel at 12 to 15 mph; in current testing, they have a human escort who trails behind on a bike.

Should they get into a situation they cannot handle, the Yandex Rovers can be remotely controlled via teleoperations based in Moscow. They travel at approximately 5 mph on sidewalks. That’s slightly faster than the average pedestrian, and following a Rover around as it trundles along its route requires a brisk pace.

Watching the delivery bots from afar, they have no trouble handling challenging environments such as construction zones or crowded sidewalks. Or even crossing the street. The bot works without complication, at least in the snapshot glance provided by following a single afternoon’s operation.

Crossing the street at a crosswalk, the Rovers understand when they have the right of way but nonetheless display hesitant behavior when motorists nudge through the crosswalks. The Rovers will cross streets only when they have clear walk signals.

Some motorists are quick to surge past the Rovers. Some slow down and aren’t sure what to make of the robots that share their traffic environment. The bots sport flags, which are illuminated with LEDs at night, to make them easier to see.

“More and more, people are getting used to them in Moscow,” Vorobev said, noting that the next generation of robots will come equipped with voice capabilities. “Some people go out of their way to be nice to them, and soon the Rovers will be able to say, ‘Thank you.’ ”

Check Out Drone Footage Of Tesla’s Model S Plaid Event Site
Next-gen Toyota Land Cruiser debuts with twin-turbo V-6, but it’s not coming to the U.S.
2022 BMW X3 and X3 M First Look: Are You Into X and M?
GM’s Super Cruise studied for how drivers actually use it
VW will get $351M in diesel settlement with former execs