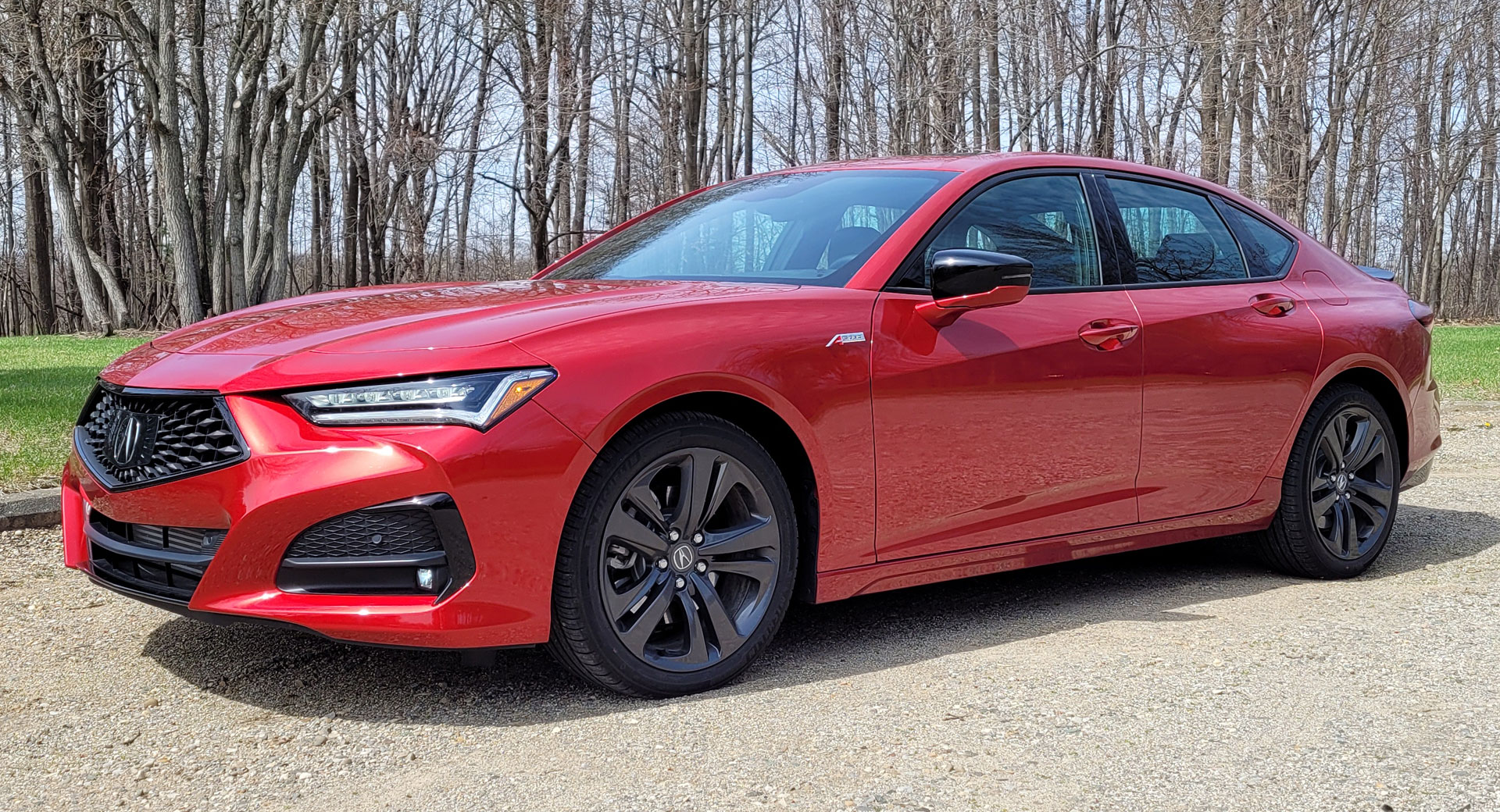 Mainstream sedans may have have fallen by the wayside, but that’s not the case in the highly competitive luxury segment.

Quite the opposite, as Mercedes recently unveiled the redesigned C-Class and Genesis pulled the wraps off the facelifted G70 not long ago. The segment has also seen plenty of fresh blood as the Cadillac CT5, Lexus IS and Volvo S60 are all relatively new or recently updated.

They’re facing a reinvigorated Acura, which is looking to climb the sales chart with an all-new TLX. After spending a week with the sedan, it’s clear they’re primed for success and the upcoming TLX Type S will undoubtedly build on that momentum.

Designed To Stand Out 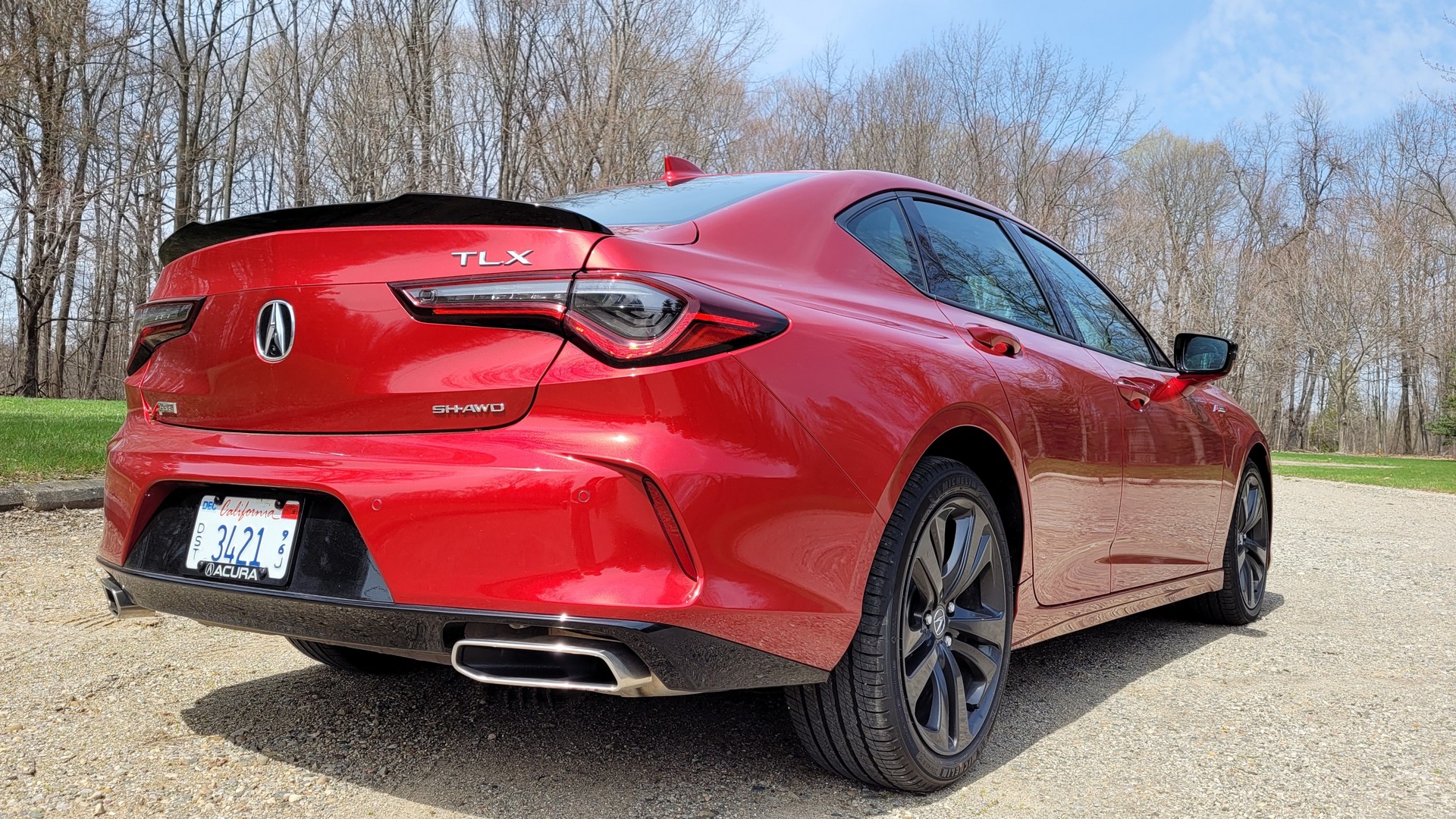 Acura’s sedan lineup has been unremarkable as of late, but that’s certainly not the case with the 2021 TLX that was previewed by the well-received Type S concept and features a bold front end with a diamond pentagon grille that is flanked by slender LED headlights.

Moving further back, there’s a long hood and aluminum front fenders which help to save 7.4 lbs (3.36 kg) of weight. The model also features a rakish windscreen, streamlined bodywork, and a sharp character line that cuts through the doors and wraps around the vehicle.

Other notable highlights include a flowing roof and an expansive greenhouse that provides excellent visibility. Designers also gave the sedan distinctive taillights, a sporty dual exhaust system and a short rear trunk with an integrated spoiler. 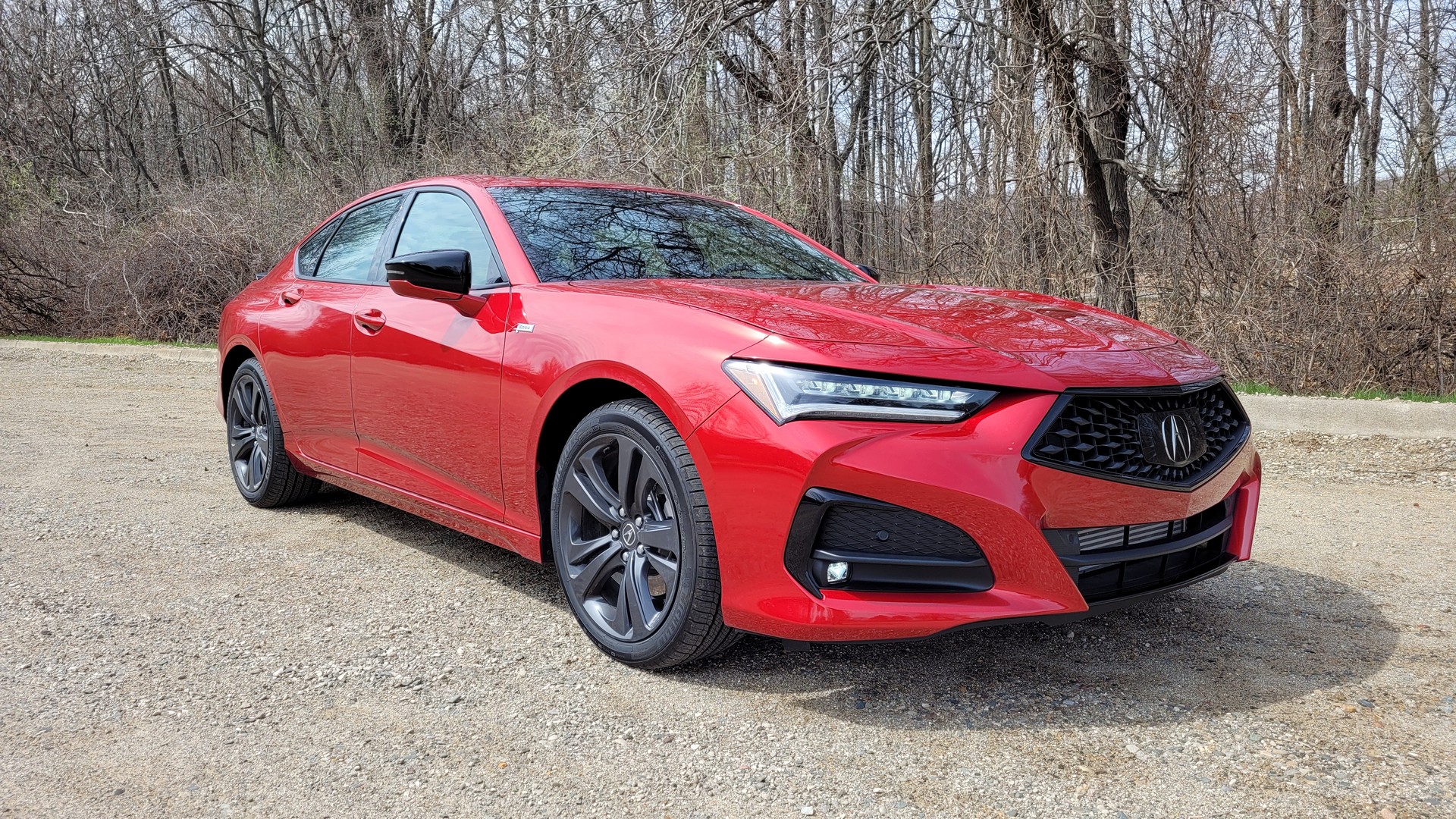 Our A-Spec tester goes even further as it features tinted lighting units, black accents and a black rear spoiler. The car also rides on exclusive 19-inch alloy wheels which have a shark grey finish.

As a result, the TLX is a ‘tweener’ as it straddles two different segments thanks to its generous dimensions and affordable price tag. It’s the same ‘Segment Above’ strategy used by the Cadillac CT5 and this makes it the TLX’s natural competitor, although both models also fight compact luxury sedans such as the Audi A4, BMW 3-Series and Mercedes C-Class. 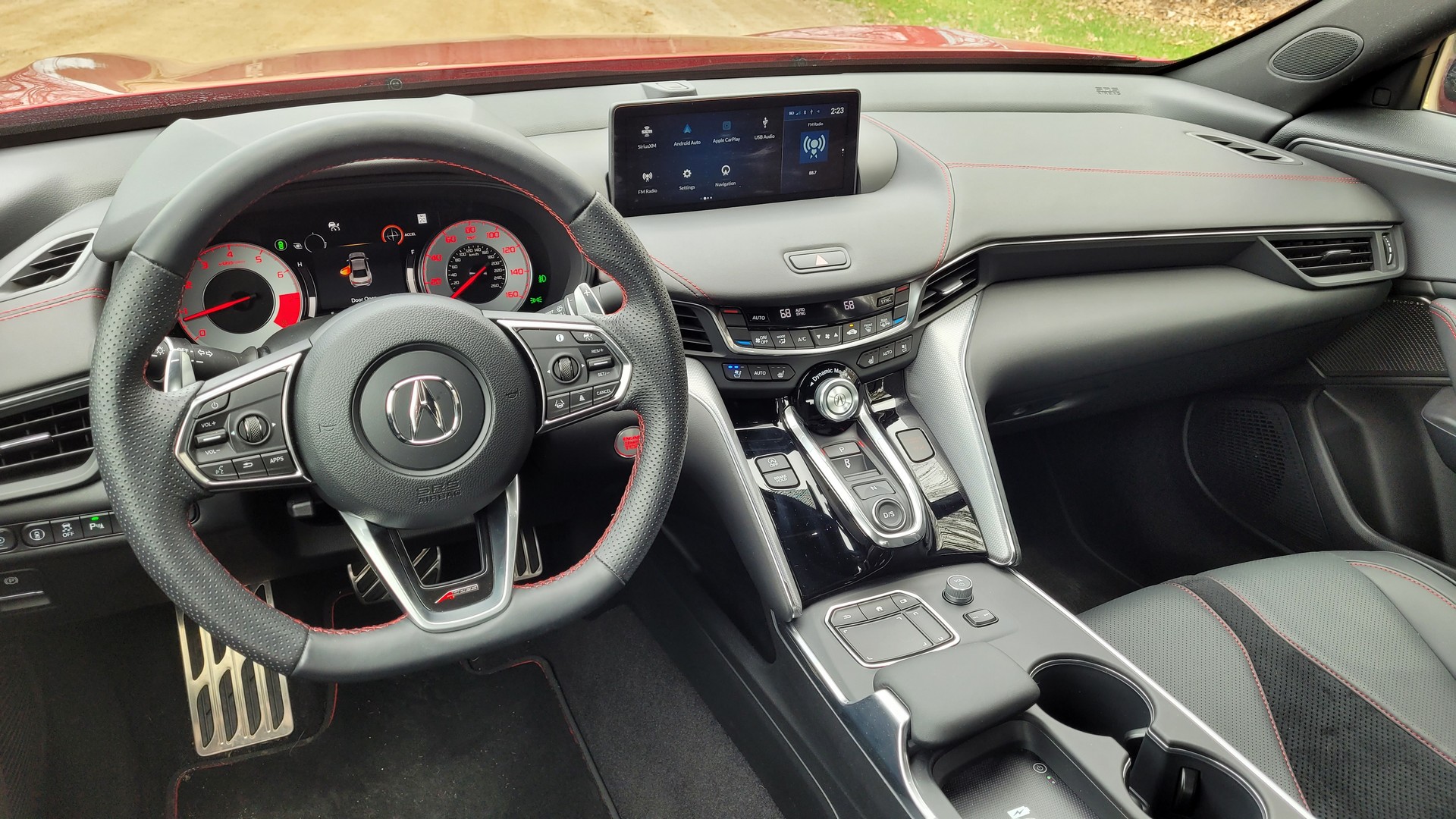 The sporty styling continues in the cabin as the TLX A-Spec features an excellent flat-bottom steering wheel, which is wrapped in perforated leather. It resides in front of analog gauges that are separated by a 7-inch multi-information display.

To the right is a tiered center stack with climate controls, gloss black trim, a push-button shifter and a drive mode selector. It’s topped by a 10.2-inch display, which replaces the dated dual-screen setup used in the previous TLX. The display is set far back on the dash, but this isn’t an issue as it’s not a touchscreen. Instead, it’s controlled by a True Touchpad Interface which is located on the center console.

Needless to say, there’s a bit of a learning curve and it takes some time to get used to. However, the system is pretty intuitive once you get the hang of it and there are dedicated home and back buttons above the touchpad. Users will also find power, volume and seek controls which are a godsend. Furthermore, steering wheel controls allow drivers to quickly access favorite radio stations and adjust the volume. There’s also natural language voice recognition technology, which is a helpful alternative to entering addresses and finding a specific radio station.

As for the infotainment system itself, it’s Android-based and features customizable screens that users can swipe between. This means you can place commonly used features such as FM radio, navigation and Android Auto / Apple CarPlay where you want them and banish unused items altogether.

The system is reasonably quick as it only takes a few seconds to load the various displays. That being said, since it’s not a touchscreen, some actions are more complex and take a bit longer than they otherwise would. 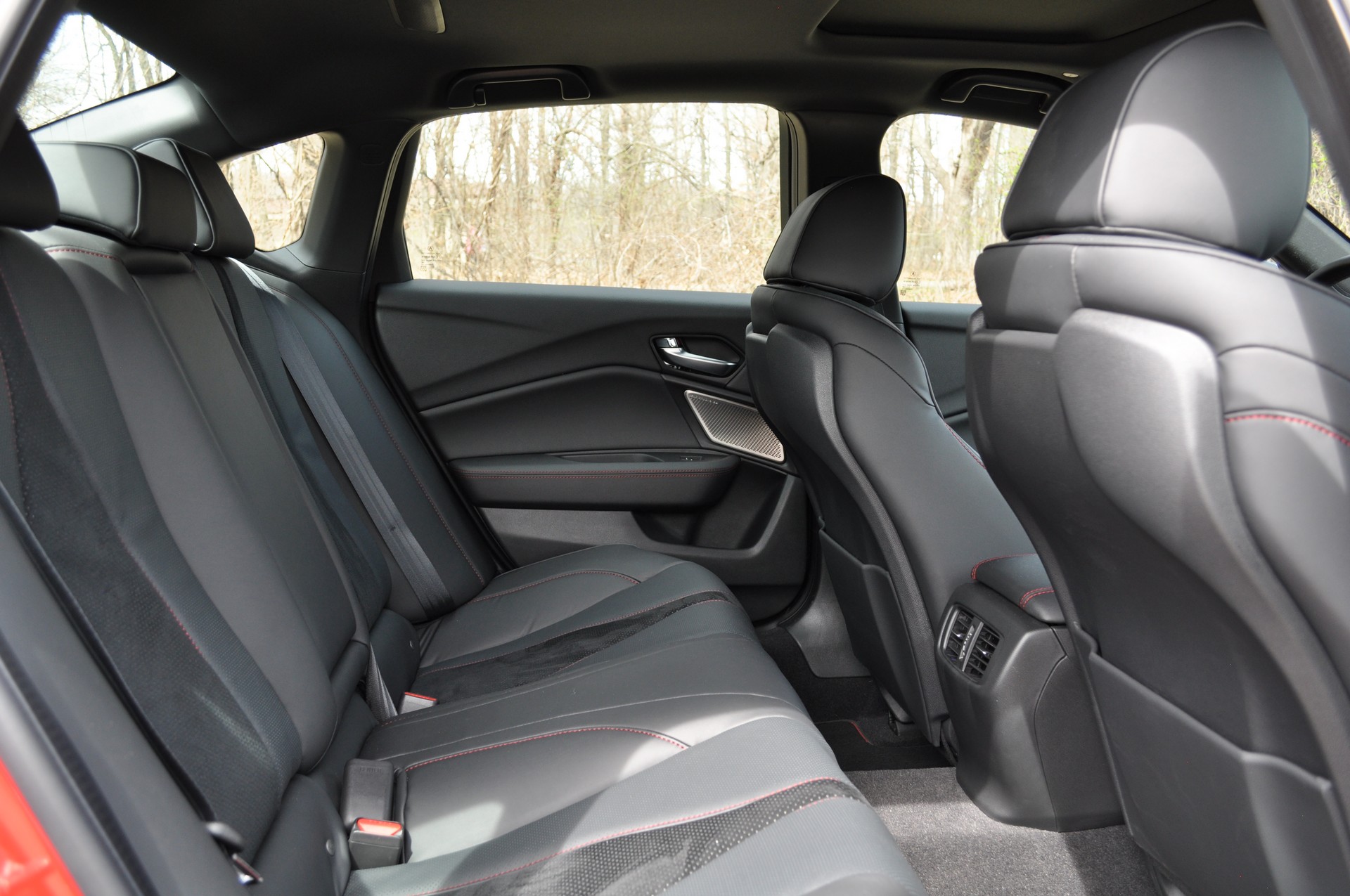 Rear seat passengers aren’t as lucky as there’s only 34.9 inches (886 mm) of legroom in back. This is significantly less than the 37.9 inches (963 mm) offered by the Cadillac CT5 and even less than the smaller Audi A4 (35.7 inches / 907 mm), BMW 3-Series (35.2 inches / 894 mm) and outgoing Mercedes C-Class (35.2 inches / 894 mm). To make matters worse, the front seat backs are covered in hard plastic which back seat passengers will bang their knees on. On the bright side, the ceiling is sculpted so there was plenty of headroom for this 6’ 2” reviewer. 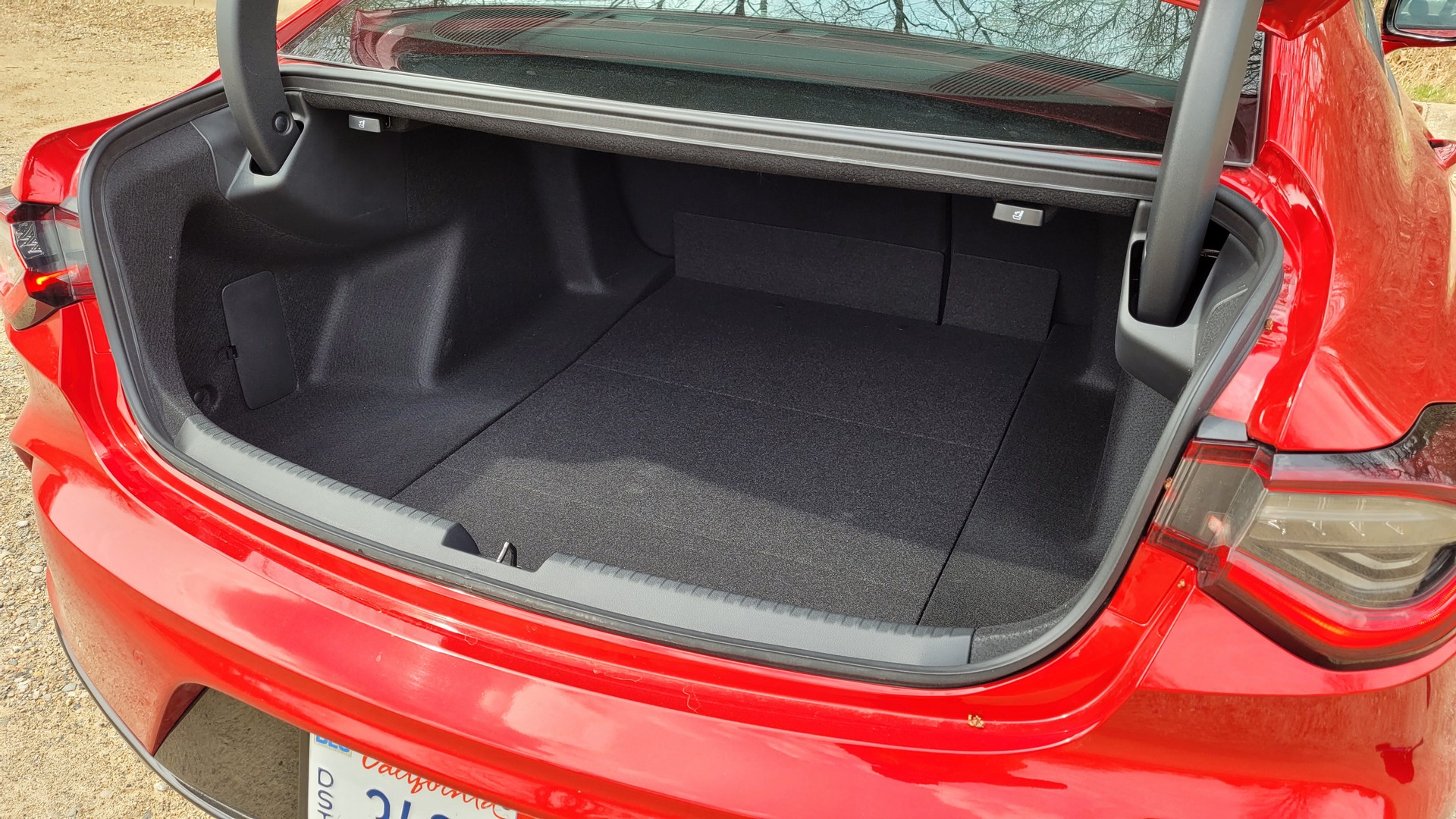 While the back seats leave something to be desired, the same can’t be said about the trunk. Despite looking small from the outside, it’s pretty spacious and offers up to 13.5 cubic feet (382 liters) of storage space. Owners can also fold down the rear seats to haul longer items and we didn’t have any issues fitting a 4 foot (1.2 meter) shovel in the boot.

Material quality is good as well as there are nice plastics, classy metal accents, and aluminum or open-pore wood trim. Buyers will also find padded surfaces and a frameless rearview mirror. While some of the switchgear is only so-so, nothing really screams cheap.

A Four-Cylinder Turbo That Punches Above Its Weight 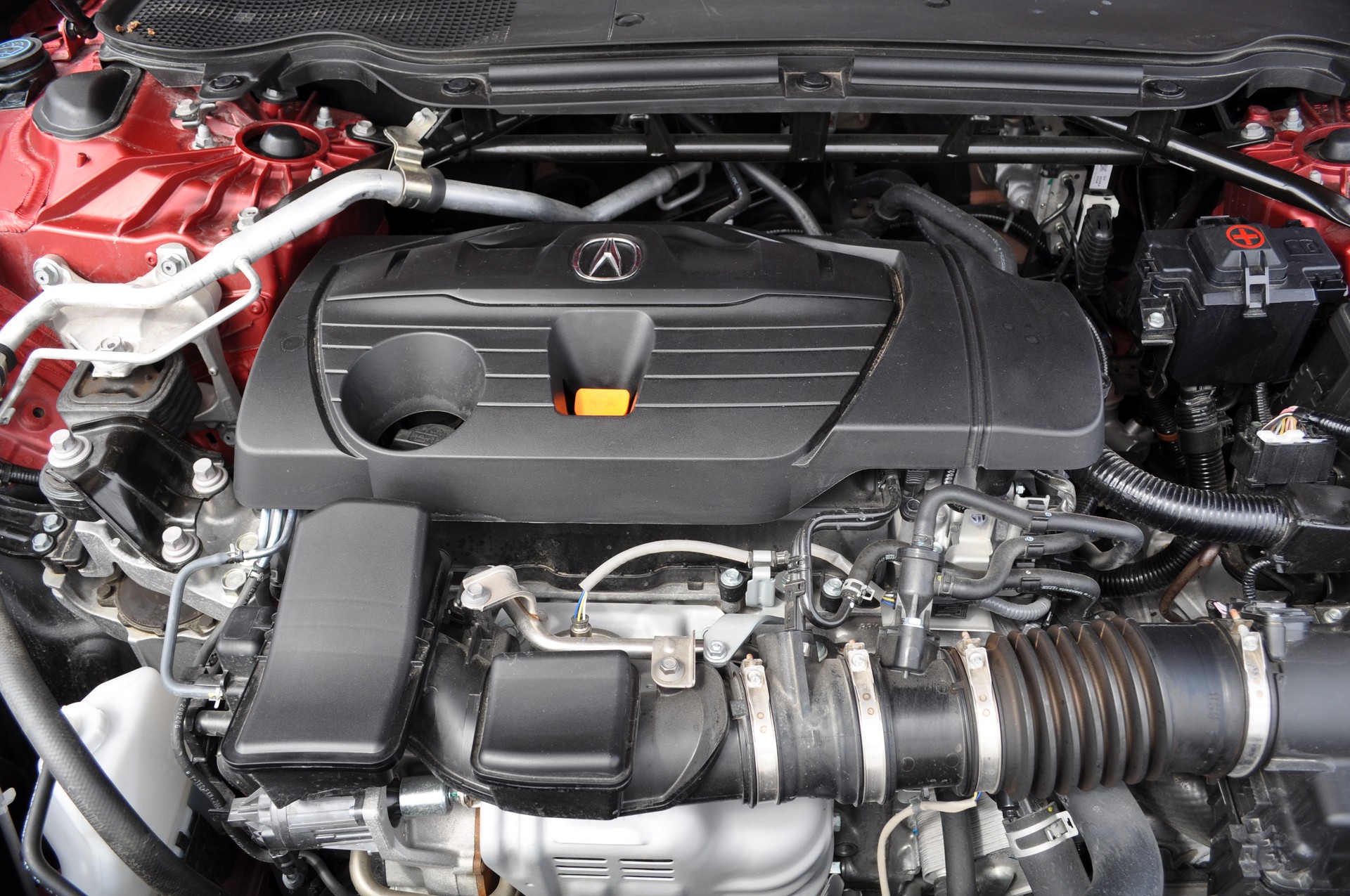 Given those numbers, it’s not surprising to learn the TLX can hustle. Acceleration feels strong off the line and there is minimal turbo lag. The engine is responsive and Sport mode optimizes this by raising idle speeds as well as deactivating the engine start/stop system. However, it feels a little high-strung in Sport and engine noise is much more prevalent. 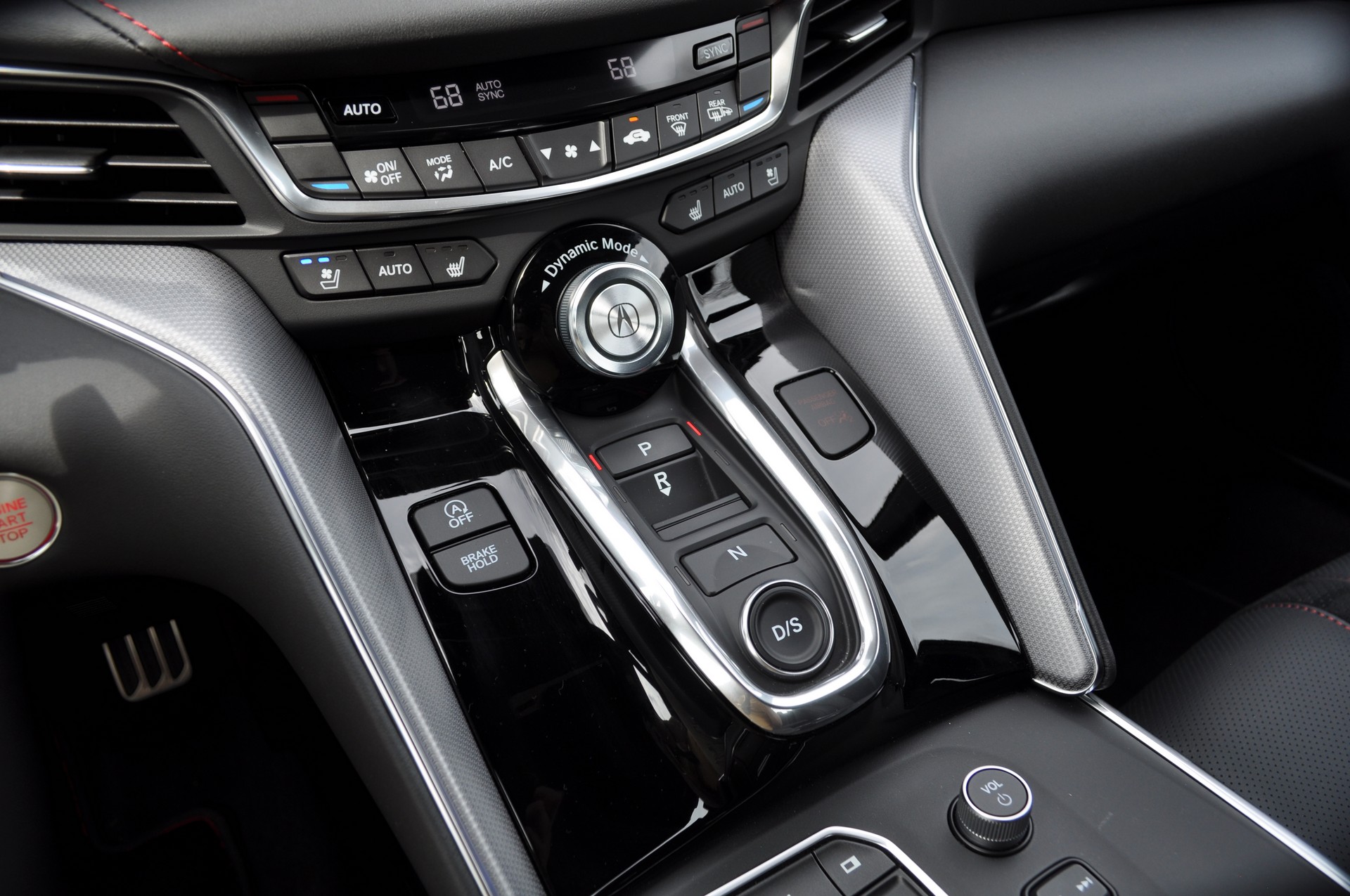 The engine is paired to an excellent 10-speed automatic transmission, which offers smooth and comfortable shifts. Like the rest of the car, the gearbox has a dual personality as putting the vehicle into Sport mode increases responsiveness and makes the driving experience more engaging. Speaking of the latter, there are steering wheel-mounted paddle shifters that allow for fully manual operation with “backstops” to prevent over-revving and potentially damaging shifts.

Those ratings echo our observed mileage as we averaged 23.5 mpg during our week of testing. However, drivers can expect better numbers as our tester spent hours idling during photo and video shoots. We’ll also add that the TLX drinks premium fuel, just like its competitors.

Speaking of the competition, the CT5 is slightly more fuel efficient as it’s rated at 21 mpg city, 31 mpg highway and 25 mpg combined with all-wheel drive. The Germans also post higher numbers but, as we mentioned before, the TLX is the most powerful of the group. 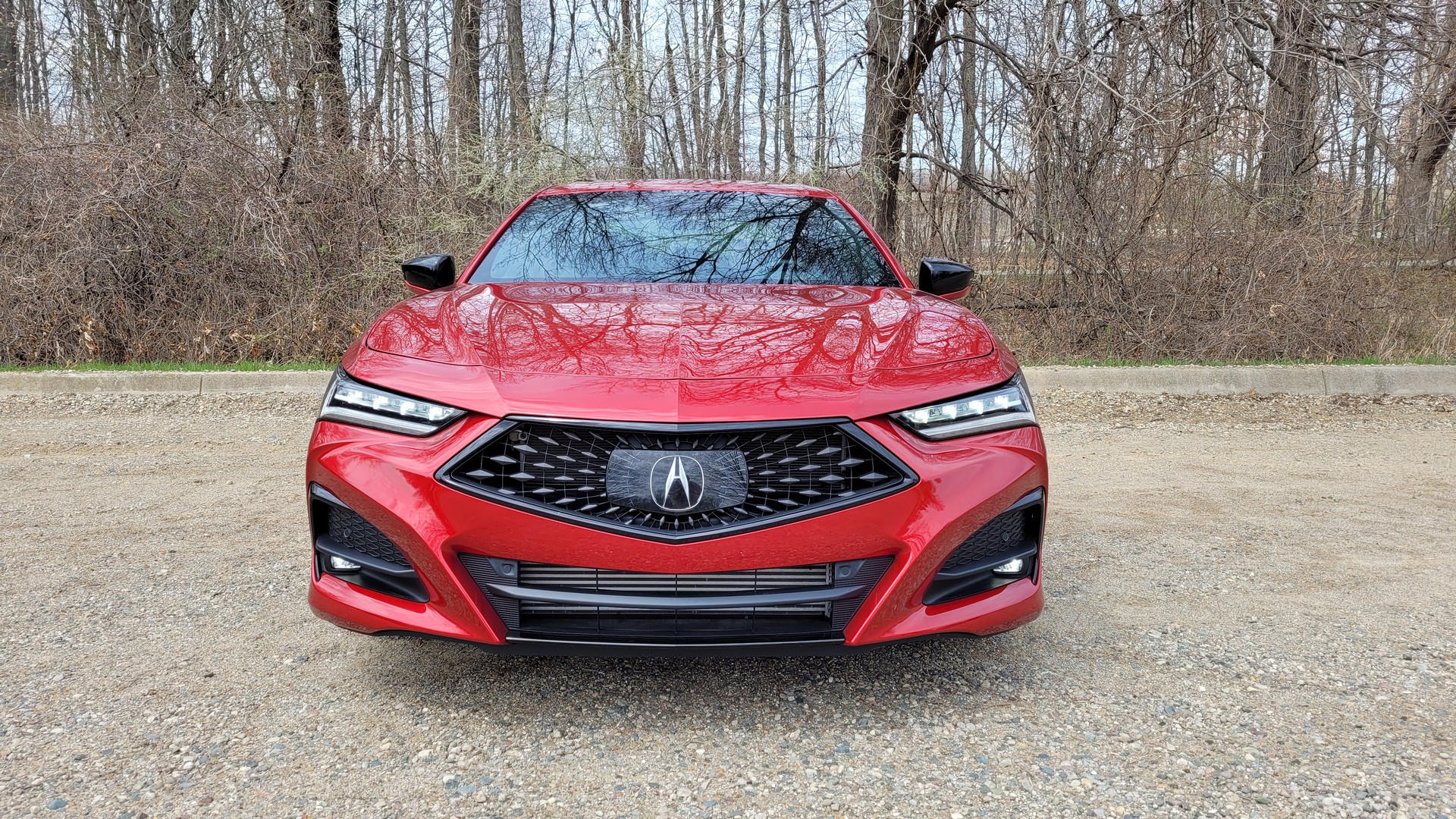 While some sedans struggle finding the right balance of comfort and sportiness, the TLX isn’t one of them as it mixes both attributes well. The ride is comfortable and refined, without feeling soft or floaty. Impacts are well absorbed and most minor road imperfections are barely noticeable.

Despite this, the TLX hugs corners and begs you to accelerate out of them. A lot of this can be chalked up to a new double wishbone front suspension and Acura’s Super-Handling All-Wheel Drive system, which costs $2,000 and is money well spent. 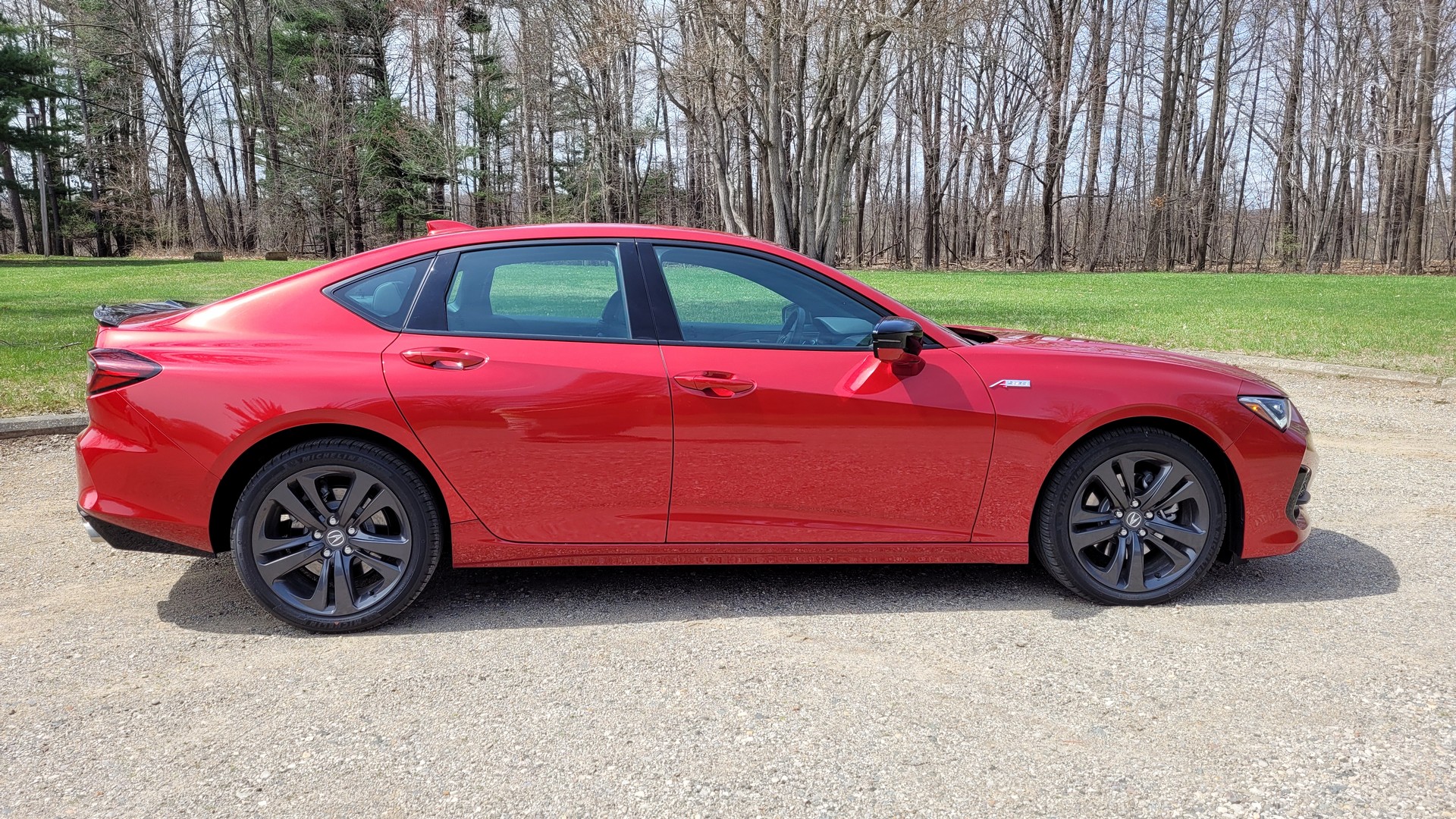 While most all-wheel drive systems are focused on traction, Acura takes a different approach as their system can send up to 70 percent of engine torque to the rear axle and appropriate 100 percent of it between the rear wheels. During cornering, the system sends more torque to the outside rear wheel and this helps to improve accuracy and control while also minimizing understeer.

While the SH-AWD system has been around for awhile, it’s now in its fourth generation and the company says it has “40 percent more rear torque capacity and 30 percent quicker front-to-rear torque transfer” than the third-generation system used in the previous TLX. The system is great and it makes the car much more dynamic and engaging than it otherwise would be. It also has all of the usual benefits of an all-wheel drive system as it increases traction, builds confidence and helps to make the car feel completely secure. 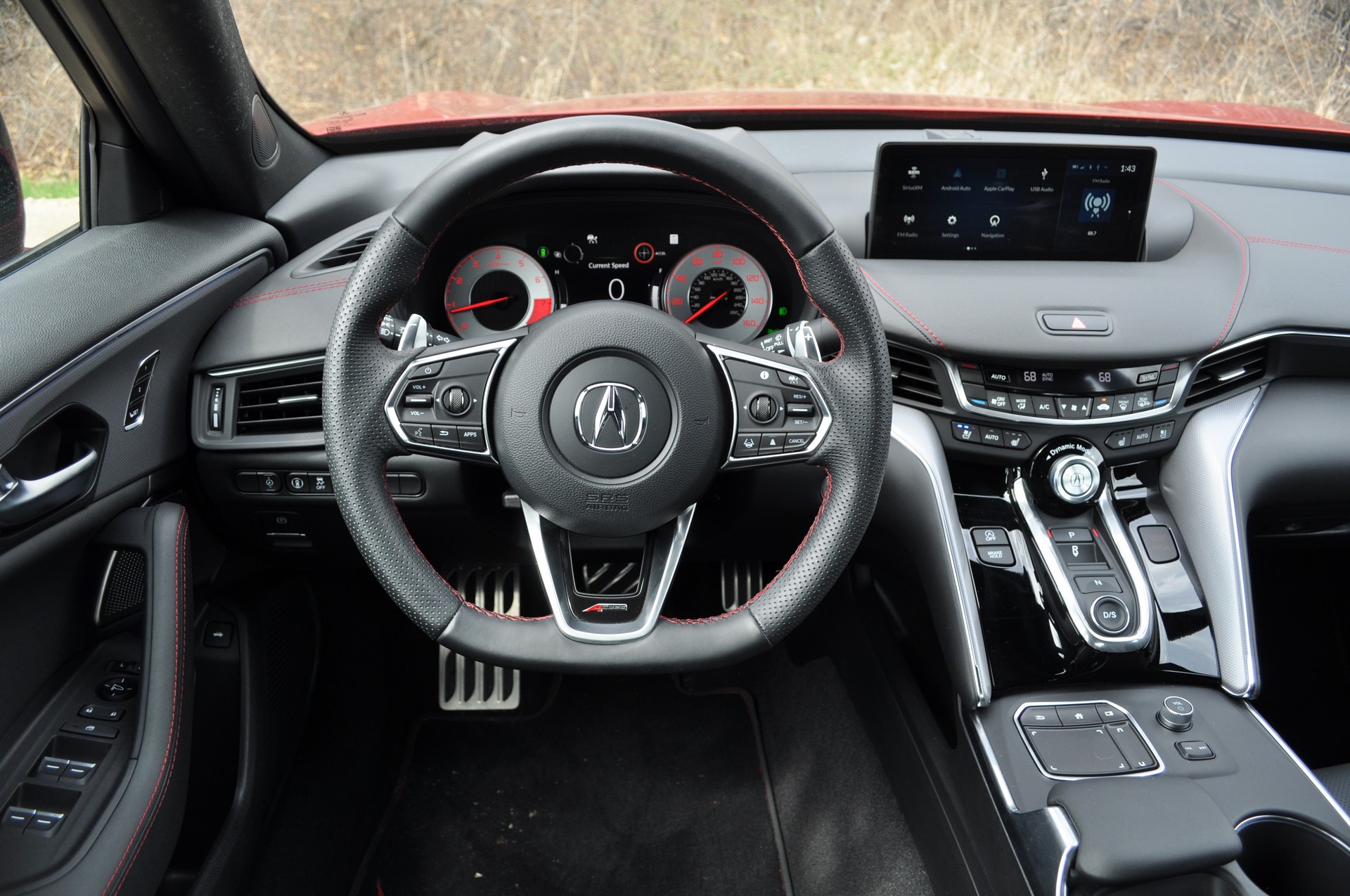 Sticking with dynamics, the TLX has an electric power steering system which is responsive and has a good feel. While things are a bit too light in Comfort mode, Normal is decent and Sport adds heft and responsiveness. Speaking of which, the Integrated Dynamics system has Comfort, Normal and Sport modes that can be accessed by turning a knob on the center stack. Each has its own distinct settings for the steering, throttle and transmission as well as the all-wheel drive system and adaptive dampers, if equipped.

The big news for 2021 is a new Individual mode, which allows drivers to independently adjust settings for the engine, steering, suspension and start/stop system. As an example, you can put the engine into Normal while keeping the steering and suspension in Sport. This allows you to tailor the car to suit your preferences and Individual mode can be easily accessed by pressing a button on the center of the Integrated Dynamics knob. 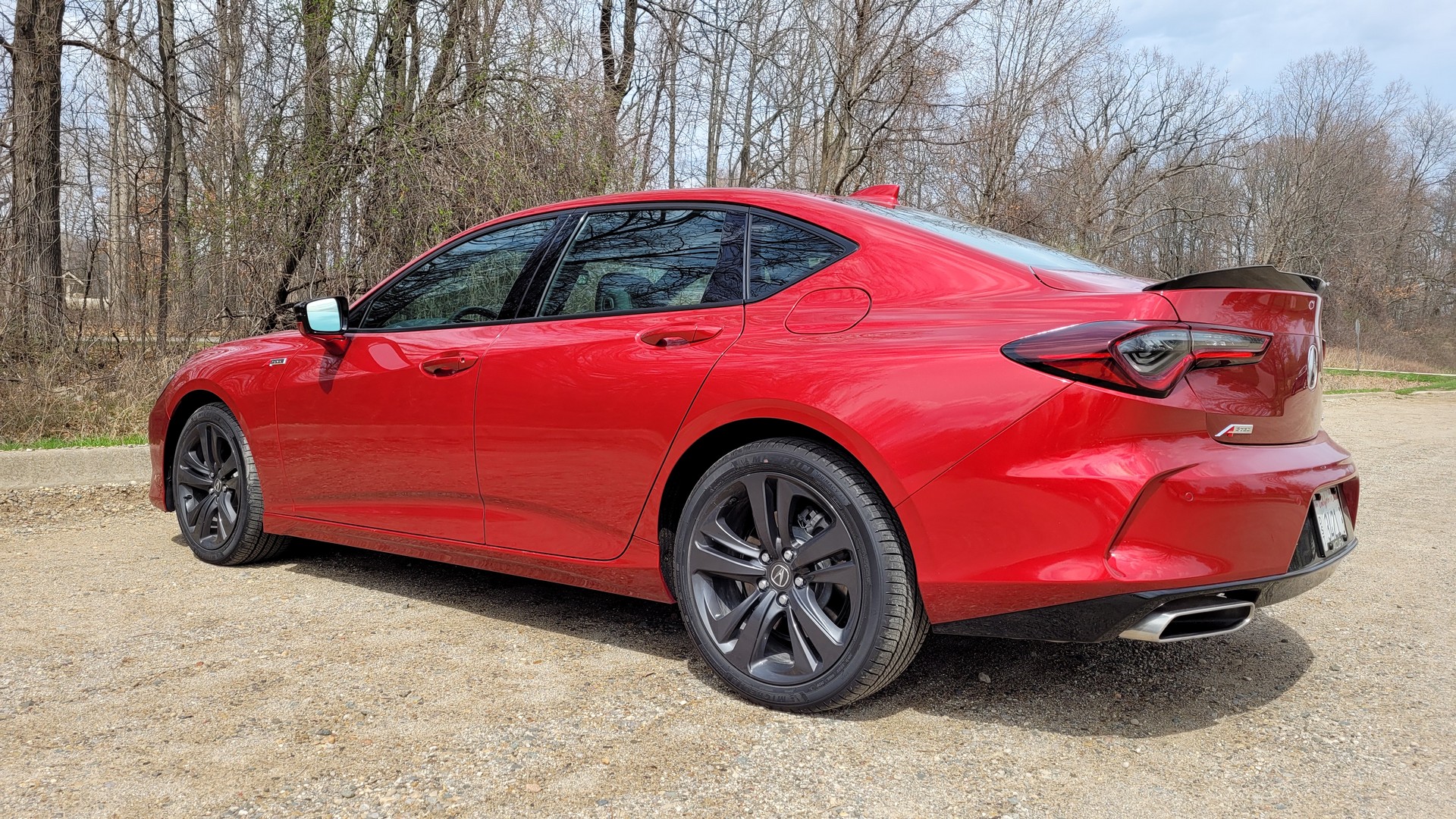 Getting back to driving, the TLX comes with ventilated front and solid rear discs that measure 13 inches (330 mm). We didn’t test them to extremes, but they feel pretty strong and offer good modulation.

Last but not least, the TLX rides on an all-new platform that feels remarkably solid. This shouldn’t be too surprising as it’s the most rigid ever offered on an Acura sedan. Global torsional stiffness jumps by 50 percent, while localized rigidity has been improved up to 100 percent in some places.

Engineers also focused on improving weight distribution as a number of front end components are now constructed out of aluminum, while the battery has been moved from the engine compartment to the trunk. Thanks to these and other changes, the 2021 TLX has a 57:43 weight distribution which is an improvement over the previous model’s 60:40 setup. 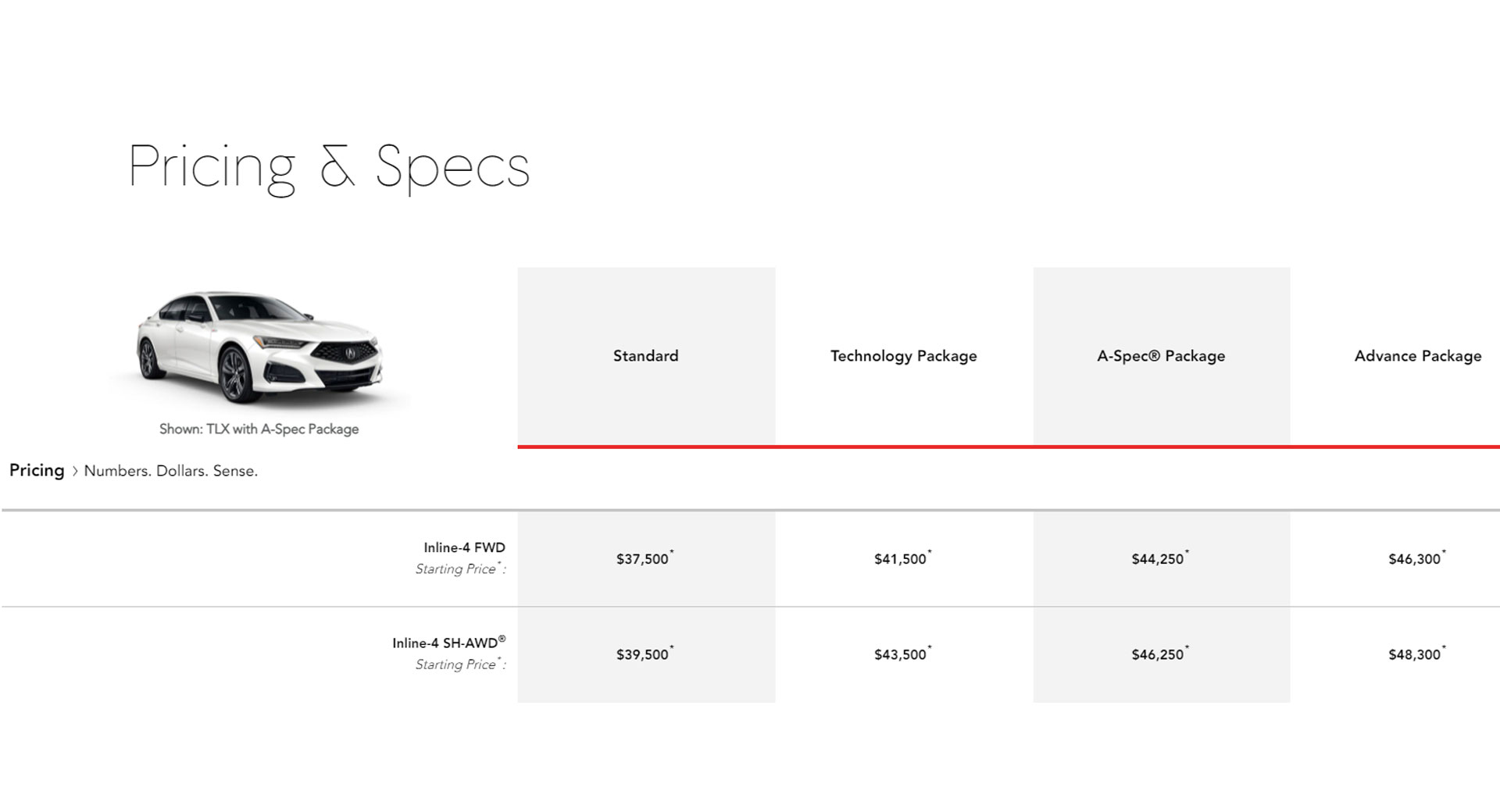 The TLX has a lot going for it and pricing starts at a reasonable $37,500, excluding a $1,025 destination charge. For that modest sum, customers get a nicely equipped luxury sedan with an acoustic glass windshield, a moonroof, LED lighting units and 18-inch alloy wheels.

The cabin comes loaded with amenities including 12-way power, heated front sport seats with leatherette upholstery. Buyers will also find a 7-inch display in the instrument cluster as well as a 10.2-inch infotainment system with Android Auto and Apple CarPlay. 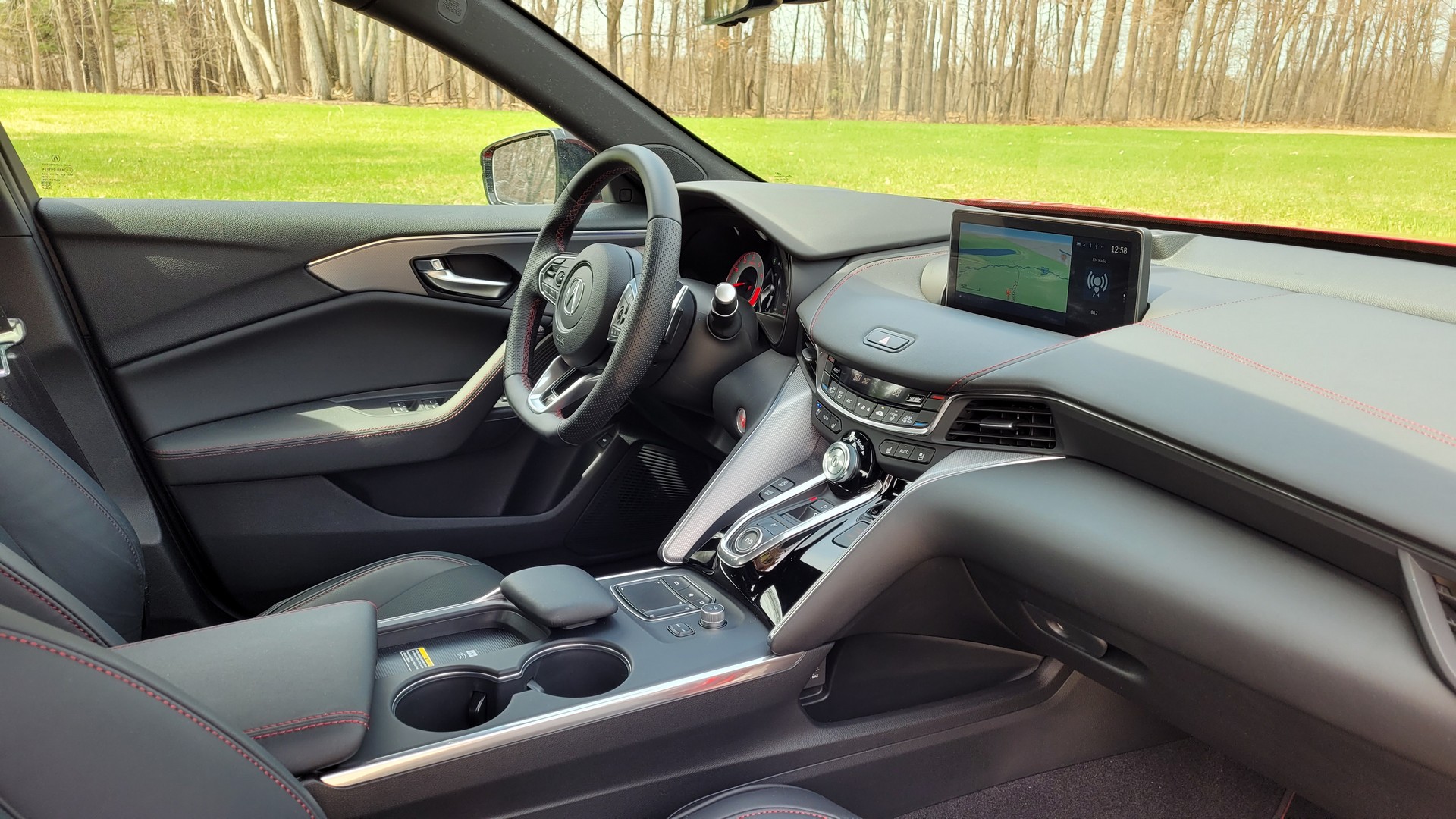 Moving up the trim ladder is the $41,500 TLX with the Technology Package. It features larger 19-inch wheels as well as an upgraded interior with perforated Milano leather sport seats. It also has a 13-speaker premium audio system and GPS navigation with real-time traffic information. Drivers will also find additional safety features including front / rear parking sensors, a blind spot information system and a rear cross traffic monitor.

The TLX A-Spec starts at $44,250 and features sportier styling inside and out. Since we’ve already covered the exterior changes, we’ll focus on the interior which features a flat-bottom sport steering wheel, a black headliner and perforated Milano leather sport seats with ultrasuede inserts. Buyers will also find a 17-speaker premium audio system, a wireless smartphone charger and exclusive aluminum trim with a geometric pattern.

Sitting at the top of the range is the TLX with the Advance Package. It starts at $46,300 and features rain-sensing wipers, a surround-view camera, adaptive dampers and unique 19-inch alloy wheels. The upgrades continue in the cabin as there are 16-way power front seats with perforated Milano leather as well as contrast stitching and piping, a heated steering wheel, heated rear seats, wood trim and a 10.5-inch head-up display.

A Compelling Sedan With Some Quirks

At the end of the day, the TLX is an exciting return to form for Acura as it’s sporty, comfortable and affordable. It also looks good and comes nicely equipped even in base form.

That being said, it isn’t perfect as the infotainment system takes some getting used to and the interior is a bit snug for such a large sedan. Of course, those are relatively minor issues as the touchpad isn’t a deal breaker and the rear seats are acceptable for adults.

Given that, the TLX is a promising sedan and our experience with it only builds anticipation for the TLX Type S.