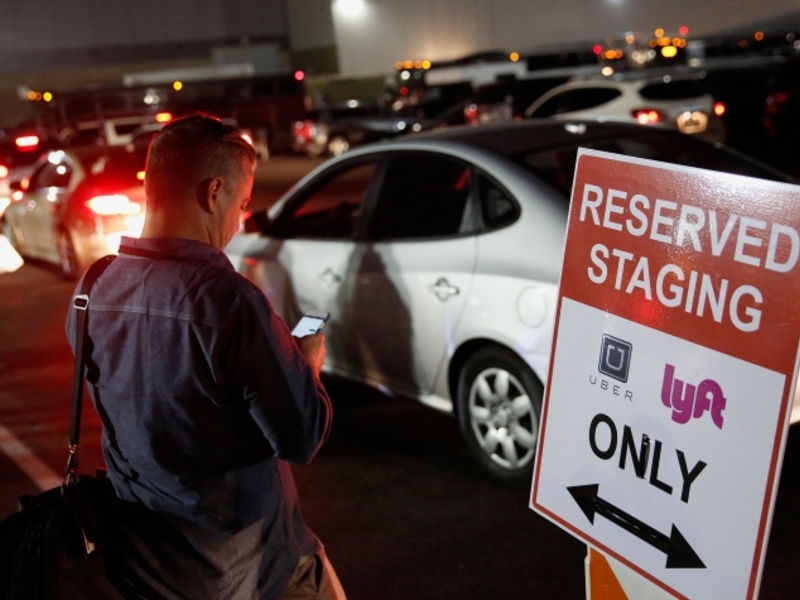 Editor’s note: A previous version of this story incorrectly implied AB5 was no longer the law in California for anyone. While the law no longer applies to ride-hail and food delivery workers, it remains in effect for other freelancers.

Uber, Lyft and other gig-economy companies face a new challenge from the Biden administration to their use of contract workers, but as they gear up for a fight in Washington they could turn to a lobbying playbook that helped them score a decisive win against California regulators last year.

President Joe Biden campaigned on the promise of providing legal protections and benefits to gig workers, who as independent contractors generally have no access to unemployment insurance, sick pay and health insurance. U.S. Labor Secretary Marty Walsh said last week: “A lot of gig workers should be classified as employees.”

In Congress, Democratic lawmakers are pushing a union-supported labor bill, the PRO Act, that in part is modeled after a California law called AB5 that reclassified most gig workers as employees.

AB5, however, is no longer the law in California for ride-hail and food delivery workers, while it remains in effect for other freelancers. Uber Technologies Inc., Lyft Inc., DoorDash Inc. and Instacart, whose business model relies on low-cost flexible labor, mounted a $205 million campaign that overturned the law for the industry last November.

Among the tactics honed in the California fight, the gig-work companies used their apps to reach out to voters and drivers through messages, emails, mailed leaflets, billboards, radio and online ads. They also urged workers on their platforms to speak out against AB5.

The companies threatened an end to ubiquitous food-delivery and ride-hail services many consumers have gotten used to during the pandemic if drivers were classified employees.

The looming fight over the status of gig-economy workers comes amid a wider debate over business regulation. The federal government exercised a light hand in regulating Uber, DoorDash and other digital-economy companies as they redefined traditional definitions of work, communications or retailing. Now, Democrats and Republicans in Washington, for different reasons, are calling for the government to exercise more control over one-time startups that dominate significant sectors of the economy.

Uber, Lyft, DoorDash and Instacart so far this year have spent a combined $1.3 million to lobby the Biden administration and members of the U.S. House and Senate, according to data from the Center for Responsive Politics. In 2020 they spent some $5.7 million, more than half of which came from Uber.

Less than two weeks after Biden won the White House in November, companies banded together to form the App-Based Work Alliance, a Washington-based advocacy group. The group is now promoting statements of drivers and food-delivery workers saying they want to remain independent contractors, and do not want the PRO Act because they fear it would deprive them of opportunities to earn money on their own schedule for a few hours a week.

The companies cite surveys to argue the majority of their mostly part-time workers do not want to be classified as employees.

While the surveys show massive support for remaining independent contractors, they also follow years of threats by the companies of eliminating work opportunities if workers become employees. Some of the surveys are co-written by researchers with company ties, sponsored by the companies or completed with unscientific methodologies by a blogger who sent out emails and social media posts.

For example, one study by the National Bureau of Economic Research listed Uber’s chief economist, Jonathan Hall, as a co-author, and a 2020 survey of 1,000 drivers by Benenson Strategy Group and GS Strategy Group was paid for by Uber. Uber said that while it paid for the poll, the survey was conducted by reputable research groups.

In California, the gig companies did not simply oppose any changes to their employment practices. Instead, they campaigned for compromise, advocating changes to labor laws to allow workers to remain contractors while also receiving more modest benefits than required for employees.

DoorDash said its workers on average work just four hours a week, while Uber said 37 percent of its U.S. drivers and 58 percent of its delivery people averaged fewer than 10 hours per week in the last quarter of 2020. The companies say those part-time gigs would become impossible under an employment model.

But Uber data from the fourth quarter of 2019, before the pandemic, also showed that California drivers working 25 hours and more per week completed more than 60 percent of all trips in the state, suggesting that full-time drivers complete the bulk of the work.

Gig Workers Rising, a group of workers that advocates for greater benefits and says it does not receive financial support from labor groups, in a statement dismissed the companies’ compromise proposal.

“(The proposal) is not a blueprint for workers’ rights, it’s a game plan for gig corporations and investors looking to maximize their profits,” the group said in a statement.

The defeat of AB5 for app-based gig workers in California was a blow to organized labor groups, California’s Democrats and even Biden and Vice President Kamala Harris, who had urged the state’s voters to reject the gig industry’s proposal.

Though AB5 is gone, gig workers in California now have access to some benefits, including healthcare subsidies, accident insurance and minimum pay while passengers are in their car. Those benefits are significantly less costly to the companies than employee benefits and labor groups say drivers do not know how to access them.

As the fight over gig-worker rights heats up on the national level, the companies could deploy similar measures.

“Right now there’s no call for action, but if that became the case, for example if a real piece of legislation or ballot measure was put forward, we’d certainly activate our driver base,” a Lyft spokeswoman said.

Uber and DoorDash said they had no specific plans for an outreach campaign as of now. Uber in August sent an email to all its drivers nationwide, outlining its proposal for a change in law to combine independent contractor status with some benefits.