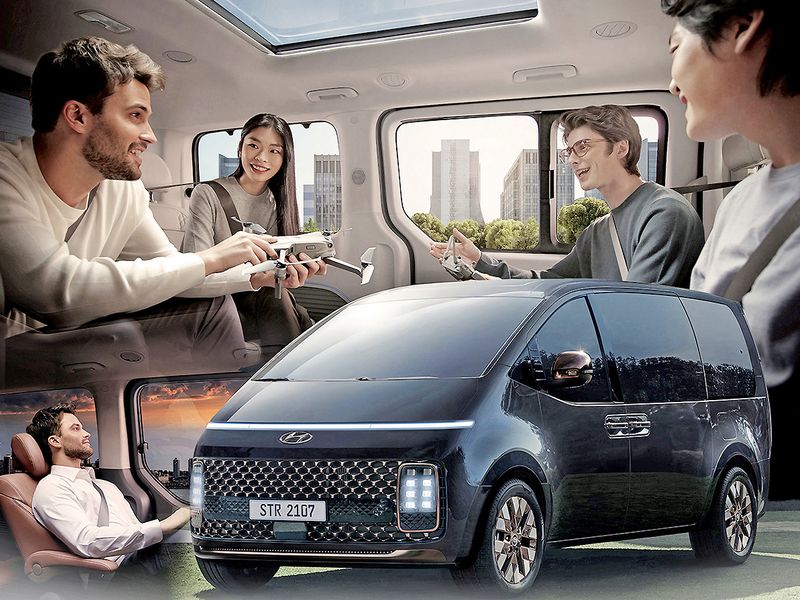 The van also captures Hyundai’s strategy for repositioning itself as a “smart mobility solution provider” for an era of ride-sharing, on-the-go workspaces, eco- delivery models and a whole new segment that the company calls purpose- built vehicles, or PBVs.

The real change starts on the inside.

At a time when companies routinely pitch concept cars as living rooms on wheels with ultraspacious, flexible interiors, Hyundai has taken a step to actually deliver all that in the Staria.

“Staria provides a preview of the space innovations, which will be an inherent part of our purpose-built vehicles in the future mobility era,” Chief Marketing Officer Thomas Schemera said at last week’s launch. “Vehicles in the future mobility era will be used in various ways and must be designed with flexibility in mind, making our customers’ time in transit feel well spent.”

The Staria won’t be sold in the U.S. anytime soon, but the nameplate embodies a new Hyundai approach to design that could underpin other models worldwide.

The method is being referred to as “inside-out,” and it starts with envisioning how the interior will be used and then developing the rest of the vehicle around that.

In the Staria, inside-out delivers a cavernous cabin that can be configured to accommodate two to 11 passengers. The rear seats not only slide forward and backward, but they also move side to side to better tailor the fit to individual body types.

In the nine-seat Premium grade model, the seats in the second row can swivel 180 degrees to face backward, creating a mobile meeting room for work or a rolling living room for families.

The layout leverages a long wheelbase with the wheels pushed to the corners and a high ceiling that Hyundai says allows the “average school-aged child to stand upright and move with ease.”

Hyundai said the Staria’s interior was inspired by a cruise ship and its exterior by the looks of a spaceship. That includes its streamlined silhouette, digitalized headlights, slit-like running lamp, low beltline and panoramic windows.

Hyundai Motor Group Chairman Euisun Chung is banking on PBVs as a pillar of his plan to fortify the South Korean company for the coming era of electrification, autonomous driving and new mobility by investing some $87 billion in new technologies and businesses through 2025.

Part of that vision is branching into the business of transport hubs that serve as terminals and transfer points for tomorrow’s vehicles and even flying cars.

Hyundai sibling brand Kia wants to become a leader in PBVs. It anticipates specialized vehicles with skateboard platforms and modular bodies that will cater to corporate and fleet buyers. Kia expects demand for PBVs to soar fivefold by 2030 because of e-commerce and ride-sharing.

The Staria also will feature prominently in Hyundai’s electrification push.

Hyundai Motor Co. wants to achieve global market share of between 8 and 10 percent in electric vehicles by 2040. It also will keep pressing ahead with hydrogen fuel cell vehicles.

When the Staria goes on sale in Europe, Asia and the Middle East in the second half of this year, it initially will come only in gasoline and diesel variants. But Hyundai said fuel cell and hybrid versions eventually will be introduced. No full-electric model is planned because of range limitations.

The van will be made at the Ulsan plant in South Korea. Hyundai hopes to sell 80,000 a year.

Said Schemera: “We are going to set a new benchmark in this particular MPV segment.”