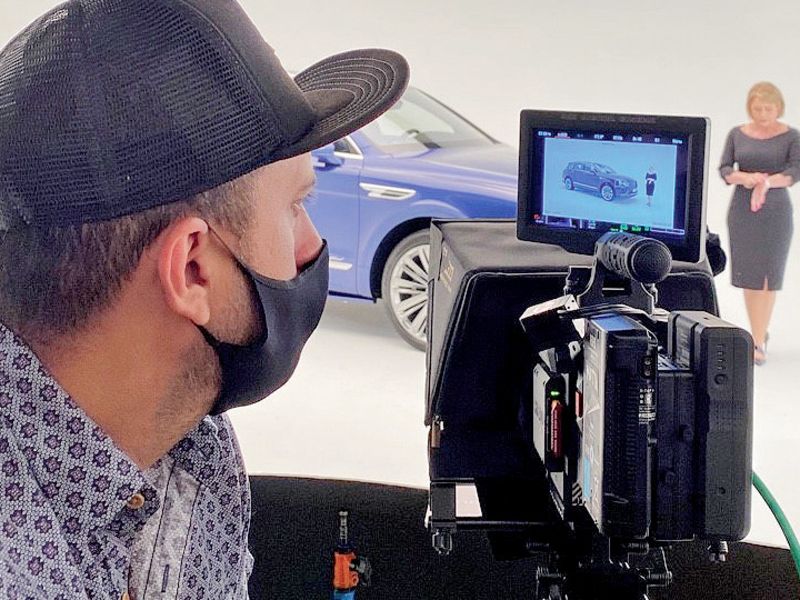 The pandemic turned some automotive ads into real family affairs.

Automakers have turned to a predictable blueprint over the years when pitching utility vehicles and minivans: bustling children in the back seat and happy parents up front taking them on an adventure.

In normal times, those were all actors only pretending to be related, but filming during a health emergency led advertising agencies to take a different approach.

Rather than putting a set of strangers together, ad teams found it more sensible to use actual families — or couples and roommates — that already had regular exposure to each other.

Hyundai’s ad agency, Innocean USA, made sure that the sets were easily reachable by car instead of having to fly. Hyundai found a family of four to use in a campaign for its Santa Fe crossover.

“We just decided it was going to be too complicated with four people in the car to be shooting around them, or to be putting up plexiglass, and it wouldn’t be safe,” Nicolette Spencer, Innocean USA’s senior vice president, head of production, told Automotive News. “At the time, people weren’t doing the regular [COVID] testing, so we decided to go with a real family.”

It was a hectic year on the marketing front, with agencies and automakers having to adjust to a new reality defined by stunted travel, stringent testing and smaller crews on sets. However, a more efficient ad industry could arise out of this tumultuous period as the pandemic leaves an imprint in the minds of creatives.

American Honda expects the pandemic to bring about lasting change in its planning and production process. Ed Beadle, assistant vice president of the company’s automotive marketing division, said the crisis has “made possible an openness to change that has been embraced across our marketing organization.”

Even as the automaker took extra caution during film shoots, Beadle said Honda expedited production times and created a more streamlined casting and content review process that it will continue.

“Faced with social distancing challenges, when we filmed our Honda Pilot campaign, we hired a real family for the spot which enabled us to film in more settings than would have been possible with multiple actors coming from different places due to the restrictions related to COVID-19,” Beadle said in an email.

While filming for its “Rugged” light-truck campaign during the height of the pandemic last year, Beadle said, Honda made the most of its time by capturing “a multitude of assets that could be leveraged throughout various iterations of the campaign.”

As Chevrolet adjusted to the pandemic, the brand still wanted to produce the same kind of content with just as much innovation as before, but in a safe way.

Being in the truck market helped because pickup spots often focus on one man in a vehicle. Chevrolet stuck with that formula in one of the first Silverado spots shot after the pandemic began, said Jennifer Hoffman, Chevy’s senior manager for Silverado marketing and advertising.

The brand has tried to maintain safety as it brought in more characters in other Silverado spots, including for a campaign starring singer Breland that was shot in Nashville and featured numerous dancers. Hoffman said Chevy has been keeping ad shoots outdoors as a precaution and sometimes with actors who are a real-life couple.

“When it comes down to everyday filming, we use local crews,” Hoffman said. “We try to use people that are already in bubbles together.”

Innocean halted travel for several months when the pandemic began, returning during the summer. There was no game plan when the virus took off, so the agency found itself plotting ideas and presenting concepts to clients on video calls. The team had to rely on previously filmed footage for ads in those early months.

Now during filming, Spencer said a COVID compliance officer on set makes sure everyone abides by the rules and isn’t standing too close to each other. Health questionnaires have to be completed, and there are no buffets — only prepackaged food.

Spencer said she’s expecting less travel even after the pandemic. If a celebrity the agency wants to use is based in Australia, she believes it would make more sense to do a remote shoot instead of flying there or bringing the person to the U.S.

“I’m not going to change my mind about that person because they’re in Australia, because now I know this can be done quite easily remotely,” Spencer said.

The pandemic altered everything for ad agency Tier10, from obvious things such as daily testing while on set to more subtle changes, including how the company books hotel rooms.

When the firm resumed shoots over the summer, it chose hotels with the lowest occupancy rates to avoid being around too many people.

“That’s something you never really think about,” Scott Rodgers, the agency’s co-founder, told Automotive News. “How are we going to travel and just not be around strangers?”

On top of that, the agency had to take into the account the civil unrest sparked by the death of George Floyd in Minneapolis, one of the cities where Tier10 needed to film. The agency sent scouts to ensure locations did not include boarded-up buildings.

The number of people on set was trimmed from around 20 people to as few as six. Production assistants who made coffee runs and did other tasks were scrapped. The agency still rented certain equipment from local production companies where they filmed, but they didn’t hire big teams of people to work the sets.

“We would rather be working in creating awesome creative, not putting our families at risk,” Rodgers said, “and if that meant everyone picking up an extra job while we’re there, meaning I’m going to jump in and hold a light or something like that, then that’s what we did.”

The agency normally would use 10 to 12 actors for a shoot because it makes ads for several nameplates at the same time. But that number has dwindled as well, and sometimes the agency now relies on stunt drivers and shoots the car rather than including an actor.

When ads still need actors, they’re kept at a distance, and a car gets cleaned before being moved after the actor is finished.

Daily coronavirus testing has added a new expense to productions, Rodgers said, with tests costing about $300 each.

“Testing is very expensive,” Innocean’s Spencer said. “It’s skyrocketing. I don’t know if advertisers are going to be able to stick with that long term.”

At one point, Rodgers found himself unable to go home because his wife contracted the virus and had to quarantine. He was away from his family for a month, staying at a hotel in Washington, D.C., near his home between other shoots around the country.

“How we’ve responded to the big changes last year, it defines us as a group, as a company, and our creative and what we’ve been able to accomplish,” Rodgers said. “It could have been ‘woe is me,’ right? We could’ve all just sat back and said, ‘Well, we’re not going to film,’ which a lot of people decided not to do. We just love creating content, and pandemic wasn’t going to stop us.”