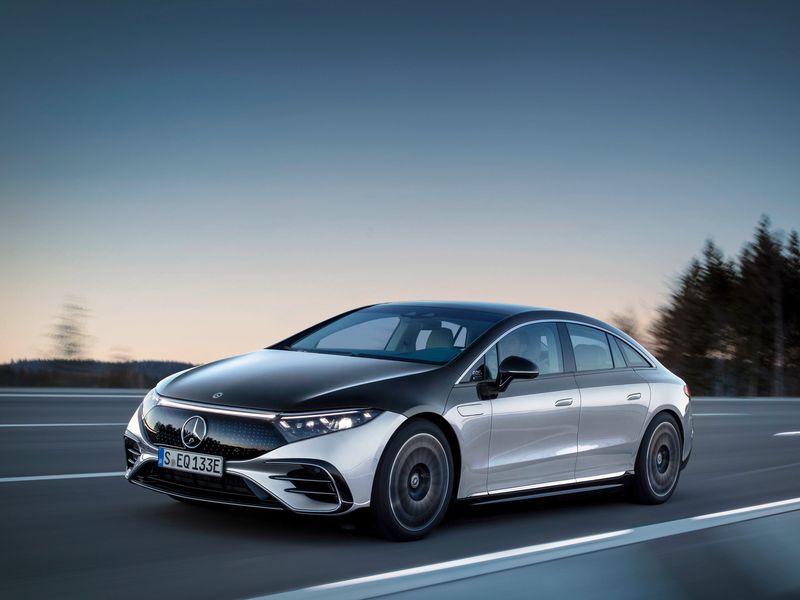 Mercedes-Benz wants to shock and awe with its first battery-electric model in the U.S. — and attract new customers to the brand.

The EQS sedan is an emissions-free reincarnation of Mercedes’ vaunted flagship S-Class, and it’s at the vanguard of a fleet of EVs that the automaker will launch in the U.S. under the EQ subbrand.

“The biggest surprise with the EQS is maybe there is no surprise,” Daimler CEO Ola Källenius said on a media call this week. “It rides and feels like a Mercedes through and through.”

A lot is riding on the new model, which arrives stateside in the fall. Mercedes faces intense competition in the $100,000-plus EV market from incumbents such as Tesla and Porsche, as well as upstarts such as Lucid Motors, that have upended the landscape.

“Now, they’ve got to take what they’ve done with this and extend it to their more mainstream products, their higher-volume products,” Abuelsamid added.

The EQS blends performance with luxury.

It is built on a new electric vehicle platform called EVA2. Available in rear-wheel and all-wheel drive, the EQS is powered by a 107.8-kilowatt-hour battery that delivers 770 km (478 miles) of range, based on the WLTP testing cycle.

The EQS is quick — even when it’s not on the road. The sedan can be charged with up to 200 kilowatts at fast-charging stations with direct current — recovering 300 kilometers (186 miles) of range in 15 minutes.

A 126.4-inch wheelbase creates a roomy interior, while an aerodynamic exterior reduces the EV’s drag coefficient to 0.20, Mercedes said.

“We went out of our way to create the most slippery car with the lowest drag coefficient of any production car in the world,” Källenius said.

Available rear-axle steering — capable of a steering angle of up to 10 degrees — allows the more than 16-foot-long sedan to have the maneuverability of a compact car, he said.

“It’s just a little feature, but it demonstrates that the engineers think about every little detail,” Källenius said.

The EQS will appeal to “tech-oriented people” who might have not considered a Mercedes, Källenius said.

“We see that there is conquest potential with this vehicle for people who love that blend of luxury and tech,” he said. “I’m quite optimistic that we will find new fans for the brand with this vehicle.”

Equipped with up to 350 sensors, the EQS brims with smart tech and spacious information displays.

The cockpit is anchored by a 56-inch curved high-resolution “Hyperscreen” that stretches the width of the cabin and stitches together three screens — a 17.7-inch center display flanked by a pair of 12.3-inch screens.

Källenius expects the take rate of the feature to top 50 percent.

Other safety features includes images that rotate counterclockwise, nearly imperceptibly, to reduce eyestrain, and the upper part of the windshield is tinted to reduce glare. The displays are bonded directly to the glass to avoid reflection. In the event of a crash the screen panel will deform “in a controlled manner,” Mercedes says.

As if the EQS didn’t have enough screens, also available is a head-up display that uses augmented reality and 1.3 million mirrors to generate and project key driving and navigation information onto the windshield.