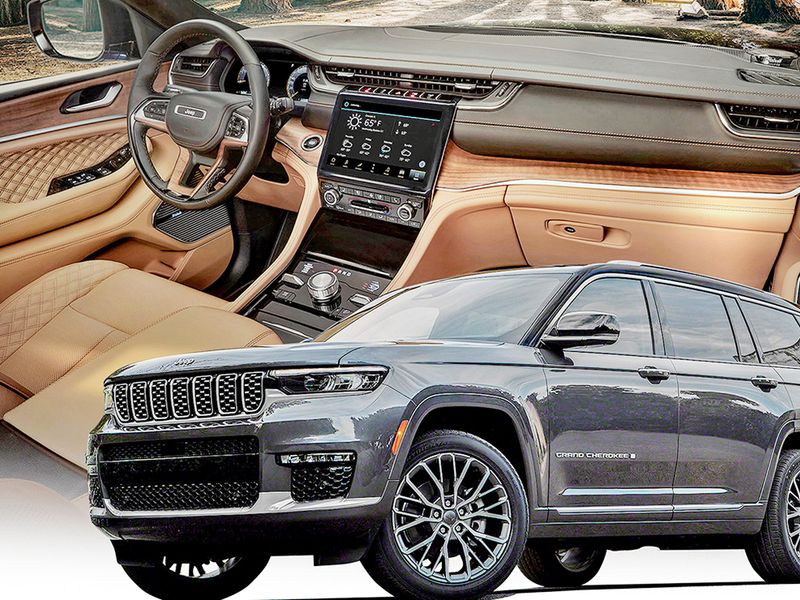 The Jeep Grand Cherokee L will be a newcomer to the three-row utility segment when it arrives at dealerships in the second quarter, but it won’t need much of an introduction. Jeep will just have to let consumers know that the Grand Cherokee can haul a few more people now.

The nameplate is one of the most established in the industry, giving it immediate familiarity with consumers. The three-row version will bring that longstanding cachet as it faces off with fresh offerings such as the Hyundai Palisade and the fast-turning Kia Telluride. Higher trim levels could end up contending with the likes of Land Rover.

The Grand Cherokee’s first three-row offering is stepping into the fray in Jeep’s typical role as a premium option. The base rear-wheel-drive model starts at $38,690, while the lowest 4×4 price point is $40,690. The top trim surpasses $66,000. All prices include shipping.

For comparison, the Hyundai Palisade starts at $33,710 with front-wheel drive and $35,410 with all-wheel drive. Both prices include shipping

John Grant, co-owner of the Jeep Only dealership in Las Vegas, believes consumers are getting a lot for the money. He was expecting a larger upcharge from the two-row Grand Cherokee, which starts at $35,890 for the 2021 model.

He has 13 customers on a waiting list to order the Grand Cherokee L at Jeep Only and eight more at another location in the city.

“This is like a spaceship,” Grant told Automotive News. “I’ve been inside the [company’s] design dome, so maybe I have a little bit of an advantage. I’ve seen and touched it.”

David Kelleher, chairman of the Stellantis National Dealer Council, thinks the pricing is rational for what the Grand Cherokee L brings to the table. Kelleher, who owns David Dodge-Chrysler-Jeep-Ram in Glen Mills, Pa., said he operates in a premium market and is expecting to sell plenty of the upper-trim variants. He already sells some pickups for $100,000.

Kelleher says the Grand Cherokee L has what it takes to pull attention from BMW and Lexus. Kelleher marvels at the breadth of Jeep, which plays in the entry-level space with the Renegade and this year will have a six-figure technological showcase in the Grand Wagoneer.

“They kept the heritage in the car, but it’s definitively different,” Kelleher said of the Grand Cherokee L. That difference “makes the current owner happy and brings in the new owner as well.”

Tyson Jominy, vice president of data and analytics at J.D. Power, said Jeep will have to spread the word that the Grand Cherokee offers a third row after so many years without.

Jominy sees the Land Rover Discovery as a possible competitor upstream. Among the mainstream options, Jominy said the Palisade will be the vehicle to beat.

The Jeep name “carries quite a bit of weight,” Jominy said. “So it probably is going to straddle that line between your common, domestic mainstream brands and then, of course, your luxury, off-road-focused brands and nameplates.”

Jeep dealers have wanted a three-row Grand Cherokee for a long time. Grant has been on the dealer council for nine years and remembers his counterparts inquiring about it when he joined.

That need wasn’t met with the short-lived Commander, a boxy contraption that confounded industry observers with its cramped third row.

Grant thinks Jeep learned its lesson with that vehicle.

It took the brand a while to figure out how it wanted to make a three-row utility, said Sam Fiorani, vice president of global vehicle forecasting for AutoForecast Solutions.

“Once you’re burned by a product flop, you’re less likely to jump right back into that,” Fiorani said. “The Commander had the short wheelbase. I know a lot of people who love the styling of it, but it just wasn’t a full three-row vehicle, and by extending the wheelbase on [the Grand Cherokee], I think you’re finally reaching that market where I can actually put someone in that back row.”

In Fiorani’s opinion, those buying the Palisade and Telluride aren’t looking for the same things that a Jeep shopper is.

“You’re not necessarily buying a Palisade or Telluride for its off-road prowess. You’re buying it because it’s a big, comfortable vehicle that drives really well,” Fiorani said. “It’s a different grouping of vehicles.”

Jessica Caldwell, executive director of insights at Edmunds, said Grand Cherokee buyers through the years have been known to step into the luxury world with their next vehicles. The three-row version could capture some of those consumers who don’t mind spending $50,000 to $60,000 on a well-appointed model.