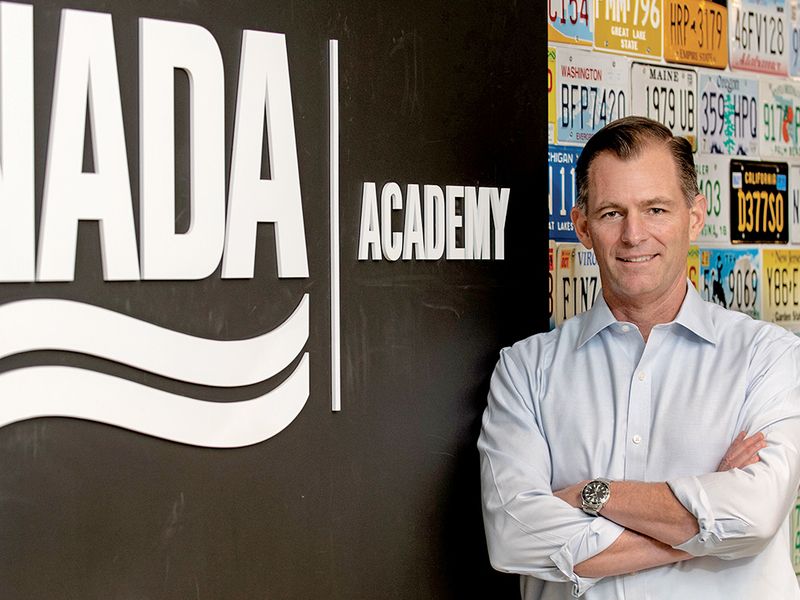 As the Washington, D.C., native settles into the role of CEO of the National Automobile Dealers Association this month, the opportunity comes with an unprecedented challenge for a new leader: steering the organization and its 16,000-plus members through the coronavirus pandemic.

But Stanton, who started his career at NADA in 2000 and most recently managed its daily operations as COO, has the advantage of seeing firsthand how the association was led through periods of crisis and stability under three former leaders: Frank McCarthy, Phil Brady and newly retired Peter Welch.

The new chief executive, who could gaze at the Capitol from his high school, also has his family’s lobbying roots to lean on and his own experience on Capitol Hill during the early stages of his career.

“Politics is in the water here in D.C., and it’s where I’ve spent the vast majority of my life,” said Stanton. “When it comes to my family, it’s in my blood. My dad was a lobbyist. My brother is a lobbyist. My sister is a lobbyist.”
The opportunity to work for Isuzu in the early 1990s helped the James Madison University graduate get out of his parents’ house and ignited his passion for the car business. That was where he began interacting with the retail world, tackling tough situations such as asking dealers to buy cars and make facility improvements they didn’t want and setting up incentive programs they thought were unfair.
In the coming months, Stanton said, he will work alongside 2021 NADA Chairman Paul Walser to build on the association’s successes while collaborating on issues facing dealers and expanding on initiatives that were established by Welch and dealer leadership.

“My overarching theme is to bring our employees and our dealers, our [Automotive Trade Association Executives] and sister trade associations together to address the challenges that we all face and to pursue the opportunities in front of us,” he said.

Pandemic aside, Stanton faces a pair of challenges as a new presidential administration takes office this month and NADA hosts its first virtual annual convention in February.

But Welch, Stanton’s predecessor who led the association from 2013 until his retirement at the end of December, said the new CEO already has developed most of the tools he’ll need to be successful after serving in multiple capacities at NADA and elsewhere in the auto industry.

“Every leader faces new challenges, and I’m sure Mike will face his share of them down the road because it’s just that kind of a business,” Welch said in November.

“But the key to success is the ability to face those challenges — face them head-on — and engage our incredibly talented staff and our 16,000-plus members.”

Tim Jackson, CEO of the Colorado Automobile Dealers Association, said Stanton is adept at navigating the various challenges facing dealers, dealership operations and the industry at large — whether pandemic-related or otherwise.

“Nothing like getting in and having your feet put to the fire initially, right out of the gate,” said Jackson, who has known Stanton for more than 15 years.

“It’ll be important for him to carry the leadership forward regarding handling the pandemic — both from an association standpoint and a dealer-facing standpoint,” he explained. “But that load should get a little lighter each and every month as more vaccines get out and as we evolve out from under the pandemic.”

Meanwhile, Jackson said NADA should focus on continuing to be a resource for dealers through advocacy and education related to digital retailing during the pandemic and beyond.

The intersection of autos and politics is a natural spot for Stanton.

His first job on Capitol Hill was as an unpaid intern working for U.S. Rep. Joe Moakley, a Massachusetts Democrat. In the evenings, he delivered pizzas and tended bar.

Stanton’s father, Michael, represented automakers in Washington as CEO of the Association of Global Automakers until he retired in 2014. The longtime lobbyist has been credited with improving the rapport between automakers and the federal government as well as tackling major issues such as vehicle emissions.

Mike Stanton eventually fell into the auto business, working for Isuzu North America and then Nissan Motor, primarily assisting dealers with their sales and service operations.

“I was quickly able to identify with the dealer situation, which at times was at odds with the manufacturers’ requirements,” he said. “Overall, dealers take a commonsense approach to business, and I quickly identified with that.”

Stanton transitioned from working for an automaker to an automotive trade association in 2000, when he joined NADA as national sales manager for NADA Used Car Guide. Two years later, he became executive director of industry affairs, a role he held until 2006.

“He’s been part of the NADA family for quite a long time,” said Phil Brady, who was NADA CEO from 2001 to 2012 and led the organization through multiple crises such as the aftermath of the 9/11 attacks and the Great Recession.

Brady said the association hired Stanton for the industry relations job because he was “a very competent and very likable individual who could see the big picture.”

He returned to NADA in 2018, in his most recent role as COO. That job is a “wonderful steppingstone” to the role of chief executive, Brady noted.

Thomas King, president of the data and analytics division at J.D. Power, described Stanton as personable, calm, thoughtful and diplomatic — someone who is “very good at building strong teams and empowering staff to do what they do best,” he said.

“While he is the new CEO, nothing he will be doing will be new to him,” said King. “He has the benefit of decades of experience representing the interests of dealers and navigating changes in the political environment.”

Brian Maas, president of the California New Car Dealers Association, said state groups representing franchised dealers will want to work with Stanton and the team at NADA to make sure the franchise system is preserved and protected.

“We’re focused on our particular state capitals, and we want to make sure that NADA has got our back in Washington and that we can coordinate together to do what we can to serve our mutual dealer members,” said Maas.

Don Hall, CEO of the Virginia Automobile Dealers Association, said he’ll do everything he can to make sure Stanton is “extraordinarily successful” in Virginia and at NADA.

“We’re going to need to lean on NADA for its communication skills, coming up with arguments and a strategy that we can apply in the states and be able to use them as a tremendous resource,” Hall said.

As he tackles his first year as CEO, Stanton — a “big believer” in leading by example — said he’ll take a collaborative approach by listening to a variety of individuals, including those critical of NADA at times and dealers who have the “voice of the customer,” he said.

“There’s so much uncertainty out there. I think the most important need is that dealers just remain nimble, flexible and then responsive,” Stanton said. “Our job at NADA is to just remain steadfast in our advocacy for dealers, and we all have to remember that dealers are on the front lines.”

Bolt surges with new markets, attention
Check Out What 7 EVs would Look Like If They Were Designed In The 1960s
New clues and details surface ahead of Super Soco’s electric motorcycle unveiling
2021 Porsche 718 Boxster 25 model celebrates a quarter century of mid-engine fun
5 Cool 2021 CES Gadgets Your Next Car Needs