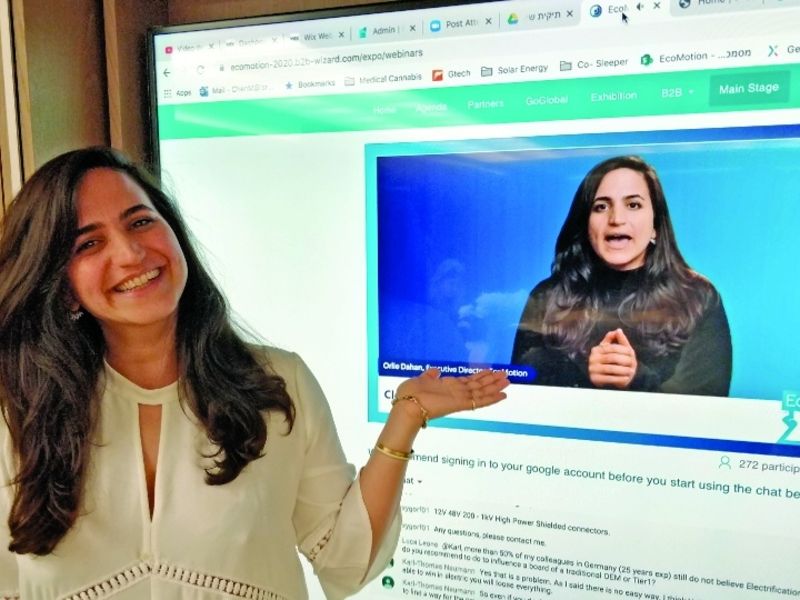 Trade show organizers are swapping face-to-face interactions with computer screens as more high-profile events shift to the Internet because of restrictions on large gatherings intended to slow the spread of COVID-19.

As planners of shows such as CES pivot away from handshakes and event swag during the pandemic, many are tasked with trying to re-create the events virtually — an onerous undertaking with plenty of perils and pluses.

While in-person events offer more possibilities for networking and live demonstrations, virtual shows emphasize the convenience of staying put, lower the barrier to entry and allow more people to participate.

But the accessibility of a virtual format doesn’t make planning and preparation any less challenging, said Orlie Gruper, executive director of EcoMotion, a major annual event in Israel that supports the mobility technology ecosystem.

“We went on an adventure,” she told Automotive News. “In a month and a half, we shifted everything from physical.”

Last year’s EcoMotion was held virtually in May — one of the first auto-related events to do so, as the coronavirus continued to spread globally and event planners opted to either postpone or cancel.

“The time was very short for us to gather all the partners, so we definitely had less partners in the 2020 main event than we had the year before that,” Gruper said. “I think we came down from 72 partners to 40 supporting the event.”

Since then, several major industry shows have followed suit.

The SXSW festival in Texas, for example, is going virtual this March after being canceled last year over coronavirus concerns. The film, music and tech show was scheduled to host about two dozen sessions on transportation and mobility. Organizers have not yet posted a full agenda for this year’s online event.

The National Automobile Dealers Association also has opted to make its annual convention completely virtual — a decision it made in October after contemplating a hybrid digital/physical option.

The NADA Show, which typically draws tens of thousands of dealers, vendors and others from across the U.S. and other countries, was set to take place in New Orleans this month. The show is now scheduled for Feb. 9-11 and will include familiar conference activities but in a digital format, such as workshops and education sessions, franchise meetings, networking receptions and happy hours.

“This virtual show will be a success. It will be the automotive event of the year — it’s first class,” NADA’s new CEO, Mike Stanton, said last month. “NADA has invested in the right platform. We’ve pulled the right educators and speakers, and the car companies are going to participate.”

“There’s no plane. There’s no hotel involved,” he said. “We think we can broaden our exposure.”

Meanwhile, organizers for the Detroit auto show are continuing to plan for an all in-person show in late September.

“We are working on ways to reimagine the show to provide automakers with as much flexibility as possible to showcase their cars and technology.”

EcoMotion’s Gruper said despite pressure to postpone the 2020 event over pandemic concerns, the decision to take the show virtual was ultimately a “no-brainer.”

“Having a virtual show is better than having no show, so it’s really important to keep things going,” she said.

While marketing the online event and operating on a limited budget were obstacles, Gruper noted one key advantage to going virtual and prerecording the sessions: a greater likelihood of getting high-profile names on the agenda. For last year’s EcoMotion, that included Mobileye’s Amnon Shashua, Nio’s William Li and Zoox’s Aicha Evans.

For virtual events to be successful, Gruper said they have to have a clearly defined end goal — whether that’s raising awareness, creating business connections or showcasing new technologies. For EcoMotion, she explained, it’s “very B2B.”

“It’s about finding your next investment partner, client or co-founder,” she said. “It is about bringing humans together in order to do business.”

Brian Moody, executive director of Autotrader, said a hybrid approach to trade shows and product launches is likely to stick around post-pandemic, citing the convenience, lower cost and ability to reach a wider audience.

This May, Gruper is hoping to host a hybrid EcoMotion — a mix between the physical and virtual worlds — but that will depend on travel and other pandemic-related restrictions.

“The world needs to keep turning, and we need to help that happen,” she said. “These big events have a meaningful part of the business side of all these companies, and it’s really important for them to put their name out there.”

Tesla moves a step closer to launching in India
Coming to the U.S.: Mazda EV with rotary backup
Why the 2022 Subaru BRZ doesn’t need a turbocharger
2021 Tesla Model 3 fit and finish goes under the critical eye of an automotive veteran
The BMW E39 M5 Places The Driver At The Center Of The Experience