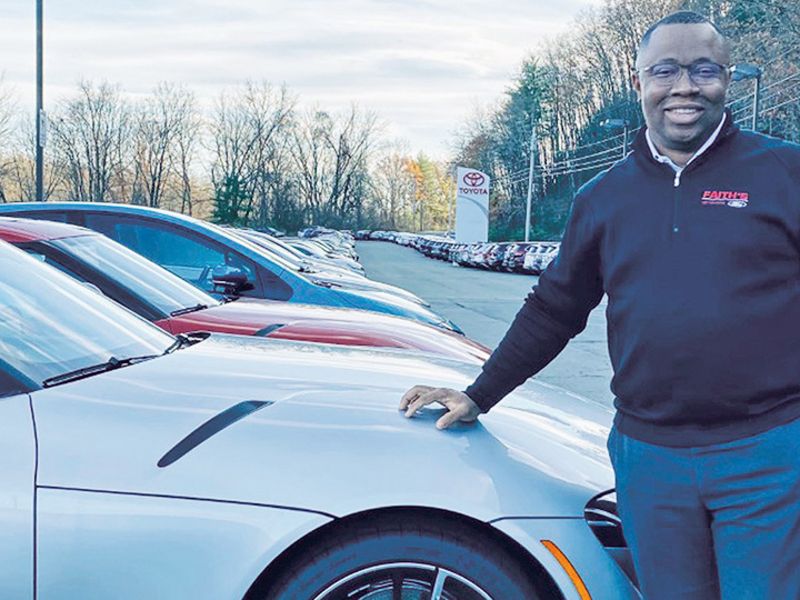 The seeds of Faith Mba’s entrepreneurial spirit were planted while growing up in Nigeria, but they sprouted thousands of miles away in Vermont.

Mba’s journey to owning a Toyota-Ford dealership in New England spanned three continents, beginning at a flea market in Nigeria where he hawked women’s clothing with his mother. He worked for a few years in the Netherlands before coming to the northeastern U.S., where his wife was raised.

As one of the few Black people in tiny Westminster, Vt., and with his thick accent, Mba knows he stands out. His worldly perspective has taught him to approach uncharted territory as a cultural chameleon of sorts.

He learned to speak Dutch and German in the Netherlands, where he met his wife. Coming from a tropical climate, the 44-year-old says he hates snow — which there’s plenty of in the Northeast — but has learned to ski.

He left eastern Nigeria for the Netherlands in 2002 to attend school. But after only a few courses, Mba ended up working at his uncle’s Enterprise Rent-A-Car branch there and sending money home to his family in Nigeria. That sparked an interest in the automotive business.

“When I lived in Europe, I tried to be a Dutch person,” said Mba, whose dealership, Faith’s Toyota-Ford, lies just over the river from New Hampshire. “Even if I’m not white, I tried to learn the language. I think it’s my background that helped me to survive up north in Vermont.”

His proclivity to adapt and take on new challenges gave him an edge as he ventured into car sales in America only a few months after immigrating here in 2004. Living near his wife’s family in Spofford, N.H., he got a sales position at a nearby Kia dealership. His skeptical in-laws wanted to know when he would get a real job. Mba knew it was a risk.

He had never sold cars before, but he was no stranger to selling. As a youth in Nigeria, Mba had honed his sales skills pitching his mother’s merchandise to passersby. His experience at Enterprise was valuable as well.

He traces his desire to be a dealer to his Igbo culture; the Nigerian ethnic group is big on making a living through commerce, he says. His mother once told him that if he pursued a career in sales, life would go well for him.

Mba ran into a tough reality during his early years as a car salesman that he couldn’t avoid as a Black immigrant: Not everyone wanted to do business with him.

He recalled one instance while working at a Ford store in Brattleboro, Vt., when a man came to check out a pickup. The man brought his mother to co-sign, Mba said, so he was ready to buy. Mba greeted them and retrieved the vehicle, but after a test drive, they abruptly left. The manager was upset, thinking Mba had blown the deal. Then the phone rang.

The man said he wanted the truck but didn’t want to buy from “the Black guy.” Instead of turning him away, the store had another salesperson handle the deal. The buyer’s wife apologized, as did Mba’s manager.

But the store didn’t have his back in that situation, he said, and his bosses later made clear that they wouldn’t promote him because they thought his race would be a problem for customers.

“The issue of acceptance was there at the beginning,” he said, “but you have to find a way to fight through.”

The challenges didn’t stop Mba’s progression. He moved on to work for Robert Cartelli-owned Ford and Toyota stores in Greenfield, Mass., about 90 miles from Boston. Cartelli served as a mentor for Mba, who expanded his responsibilities in the company as a sales manager, finance manager and finance director.

Then an opportunity arose to work as a finance director in suburban Boston, two hours farther away. He spent the next five years commuting 228 miles a day, six times a week. He got home late every night and sometimes stayed at a hotel if he didn’t feel like making the haul.

By 2016, Mba felt he was ready to take the next step. He applied to become a Ford Motor Co. dealer and told the automaker to alert him if it found an opportunity for him. When the Brattleboro store where he used to work became available, his long drives were over.

Mba acquired a dualed Toyota-Ford showroom in nearby Westminster in 2018 and sold his single-point Ford store this year. He’s now building a 40,000-square-foot facility to house his Ford and Toyota franchises.

Mba is preparing his 13-year-old son, who works in the office twice a week, to take over the business one day. His wife also works at the store.

Mba said aspiring minority dealers may have to leave their comfort zones to get their first stores.

Reuss and Reuss on EV1 and its Impact
AutoNation Q1 net income up; AutoNation USA store goal expanded
Tesla Cybertruck pays visit to Gigafactory Texas with Elon Musk behind the wheel
The Honda City Turbo II May Be Fondly Remembered, But There’s A Reason It Didn’t Last
The Alpha Wolf+ might be the perfect electric pickup truck