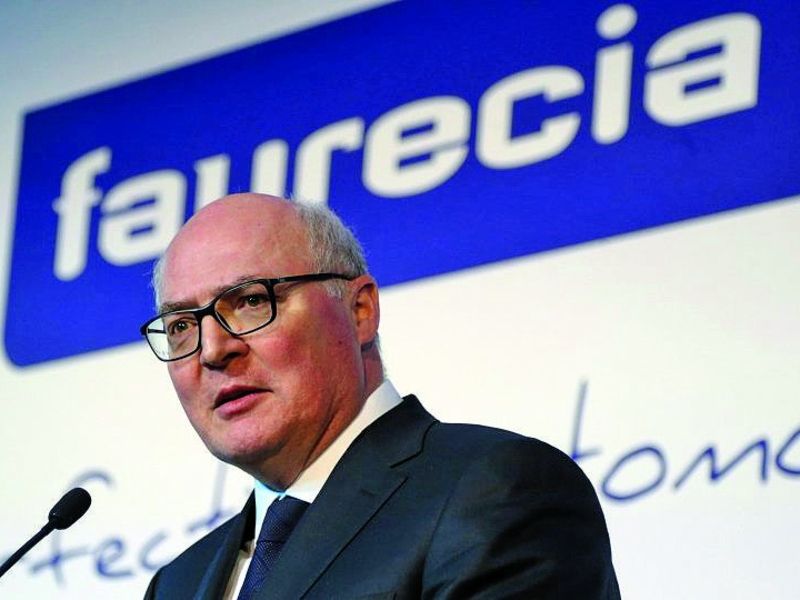 Faurecia is preparing to be a fully independent company after PSA Group divests its stake in the supplier as part of its merger with Fiat Chrysler Automobiles. Among the initiatives Faurecia is pursuing is an annual investment of up to €60 million ($71 million) in hydrogen technology and cooperation with ZF on cockpit technology.

CEO Patrick Koller, 61, spoke with Klaus-Dieter Floerecke of Automobilwoche, the German-language sibling publication of Automotive News, about the challenges ahead for the industry’s No. 8 parts maker on Automotive News‘ current ranking of the top global suppliers. Here are edited excerpts.

Q: You have said that you want Faurecia to be the world leader in fuel cells. How will you achieve this?

A: We are already one of the very few companies that can offer the entire system. And only a few suppliers are capable of industrializing the technology. At the moment, the most important thing is to come up with enough volume in order to reduce costs.

Do you want to become active only in the mobility sector or also in other industries?

With our hydrogen portfolio, we are concentrating in the broadest sense on applications in the on- and off-road sector, in shipping and for rail vehicles.

What role does the Competence Center for Hydrogen Storage Systems, which opened in Bavans, France, this summer, play in your strategy?

The center focuses on the development of lightweight and cost-efficient hydrogen storage systems. It is the only one of its kind in Europe.

The local engineers and technicians have the skills to design and test storage systems and to produce prototypes that are tailored to customer requirements. We are also able to develop new industrial processes there to speed up our production.

For the development of the fuel cell stack, we intend to locate in Lyon [in France]. In the future, we not only want to work together with our partner Michelin there, but we also want to accommodate our suppliers and research institutes here.

Faurecia has a fuel cell joint venture with Michelin called Symbio. Do you want to further expand that venture?

Symbio is well positioned to become a catalyst for the large-scale introduction of hydrogen mobility, and the company benefits from the complementary strengths of Faurecia and Michelin.

In general, we are not looking for additional joint-venture partners but for companies with whom we can cooperate on the technical side.

How do you assess the opportunities for hydrogen technology in the passenger-car sector?

Very good, but it is difficult to predict when the breakthrough will come. We expect that by 2030, around 30 percent of the vehicles produced worldwide will be fully electric. Of these 30 percent, one-sixth of vehicles will in turn be hydrogen-powered, i.e. a total of 3 [million] to 5 million vehicles. Of these, 50 percent will be light commercial vehicles as found in delivery traffic, 20 percent trucks between 16 tons and 44 tons, and 30 percent trucks, mainly SUVs and U.S. light trucks.

However, hydrogen technology will initially be used in the heavy-duty sector because battery-electric solutions do not work there. We looked at a truck drive with a power output of 480 hp. This would require batteries weighing 6.6 tons. For a hydrogen drive with comparable power and range, the weight would be 1.5 tons at most.

Are costs the biggest problem for the spread of hydrogen technology?

Due to its autonomy, payload and fast refueling performance, hydrogen will be the only real zero-emission solution for many segments, such as large trucks and other intensive-use vehicles.

Through innovation, technical optimization and scaling, the costs of fuel cell systems will continue to decrease dramatically. Our goal is to reduce the cost of hydrogen storage systems to a quarter [of the cost now] by 2030 and the cost of stacks and other components to less than a sixth.

How much money has Faurecia invested in hydrogen technology, and what other investments are you planning?

We have so far invested about €200 million ($236 million) in development, partnerships and acquisitions.

We plan to add between €50 million and €60 million per year. Above all, we have entered at the right time to take a leading role in hydrogen technologies.

Hydrogen technology is being strongly promoted in France and Germany. Has this already resulted in orders for Faurecia?

Yes, we have already received orders from European and Asian manufacturers. I can give you two examples that show that hydrogen systems are perfectly suited for commercial use.

Faurecia will equip around 1,600 heavy-duty trucks — equivalent to around 10,000 hydrogen storage systems — for Hyundai over a period of four years from 2021, which will then be delivered to Hyundai Hydrogen Mobility in Switzerland. In 2023, we will also supply the hydrogen systems for the PSA Group and a fleet of commercial vehicles. Symbio will manufacture the fuel cell stack systems.

Ford wants to bring the door production for the Fiesta model back into the company. This could eliminate 400 jobs at your Cologne plant. What’s the next step in Cologne?

Together with Ford, we want to see what partial integration of door production might look like. We have also agreed with our customer that we will take our time to find a solution. Ford will not make a final decision on how to proceed with door production until January 2021.

Do you see a general trend that vehicle manufacturers want to produce more in-house again?

No, I do not see that. On the contrary, I know of vehicle manufacturers who are taking the opposite approach and outsourcing volumes to suppliers.

Given the huge investments that manufacturers have to make in new technologies, they are increasingly looking for global suppliers to support them.

Faurecia’s third-quarter financials turned out better than originally expected. To what do you attribute this?

The Chinese market in particular has developed well and seems to be robust. China has put the COVID problem behind it. In North America, the market is also working quite well. But we have to remain vigilant regarding the COVID-19 situation.

Faurecia works with ZF in the cockpit area for fully automated vehicles. What has become of this cooperation?

We have shown that the systems of the two companies can be integrated and together we hold more than 13 patents in this area, and 30 more are currently in the application process. We are now in the phase where we want to sell these innovations together.

Does Faurecia intend to move more toward becoming a system or component supplier?

We have always been a module and system supplier. And that will remain so. There are two mainstays at the center of this strategy. One is the cockpit of the future, and the other is clean mobility.

We want to expand both areas and increase our value share per vehicle. We also expect cars to become more expensive due to increasing electrification.

That’s why we have to try to reduce the costs of the other systems. I am sure that there are ways to offer customers more technology for less money.

Sales of vehicles with diesel engines are falling. What consequences does this have for your exhaust system business?

On the truck side, there will still be diesel and they will have to become cleaner and cleaner.

On the other hand, our diesel market share has always been small in the passenger-car sector, which is now benefiting us. With gasoline engines, the components are becoming more complicated, even if the engines are getting smaller.