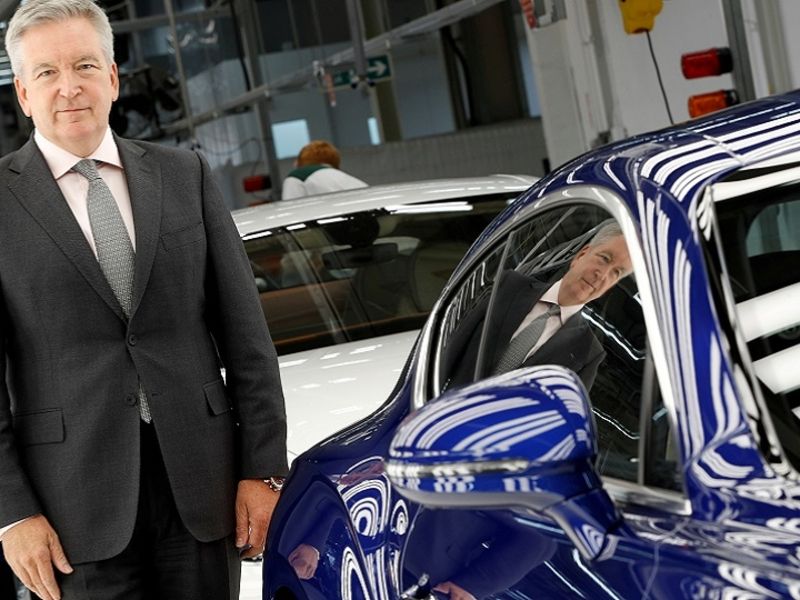 Bentley CEO Adrian Hallmark discussed the automaker’s closer cooperation with sibling Volkswagen Group brands Audi and Porsche and the UK automaker’s preparations for a no-deal Brexit in an interview with Automobilwoche, a German-language sister publication of Automotive News Europe.

Bentley had a good 2019 and you were confident about this year. How has it been so far?

It’s been a rollercoaster ride for us as it has for everyone. The first quarter was the best in the company’s 100-year history, despite the initial impact of COVID-19 from mid-March. The second quarter was also a record, but a record loss. It then recovered significantly in the third quarter. When we look at the rest of the year, we are in pretty good shape.

Will you be back in the black this year?

At the end of October things looked really good. And we can still make it. But that is not certain. Everything now depends on what happens with the second lockdown from November and how we manage to deliver the cars we have in stock. But I am certain that we are still on track to break even for the year as a whole, despite the heavy loss in the first half and a disastrous second quarter. If everything goes to plan, we should be able to make up the loss from the first half, but that depends crucially on trouble-free production and logistics by the end of the year.

It is clear that a hard Brexit would hit us. We buy from the EU many of the components that we use in our Crewe [England] plant. Europe is also an important sales market for us. If there are delays at the border or customs duties, we will feel the effects very clearly.

How are you preparing for this?

We started expanding our inventories at an early stage. We are hoarding like squirrels before winter. Previously we had parts in stock for two days, but now we have expanded that to between five and ten days. This ties up a lot of liquidity because we keep more parts in stock and it costs us a lot of money. But it is always cheaper than stopping production. The most important thing is that we keep production running. We have replenished the stocks so that even if we have problems with supplies because of Brexit, we can continue production for two weeks without stopping the factory.

Would it not be an option to move production to the EU, for example to Germany?

No. Our models are far too different from those of the other [VW] group brands for that. Our cycle time in Crewe is three times longer than that of the Porsche Panamera in Leipzig, for example. Not because we are lazy or slow, but because the entire production process is set up differently here. Bentley Motors has a low-volume production with a lot of manual work. If we were to have the same vehicles built at Porsche in Leipzig, capacity there would immediately be reduced by two thirds. And building a new factory just for us would not pay off. That is not an option.

Bentley said on Nov. 5 that from 2030 you will only build full-electric cars. So Bentley will be the first VW Group brand not to offer a combustion-engine vehicle. Did you really want to be first?

We never saw it that way. We never wanted to be last in anything, but we did not have any plans to be first either. We simply looked at the product life cycles of our models and when was the right time to switch to electric drives. And it turned out that this worked perfectly for us at the end of the decade. On top of that, there was a clear desire from our customers for Bentley electric vehicles.

Will it be a big change? Bentley currently has no full-electric models.

It is a big step for us to go electric in 2030. A 100-year-old company that was known for the best 12-cylinder engines and the most successful 12-cylinder engines will not be building any more combustion engines in less than a decade. By 2026, everything we offer will be electrified. Either plug-in hybrids with good electric range or full-electric cars. This is a clear signal that we take the climate targets seriously and want to make our contribution.

I can’t say yet. After 2026 we will only be building full-electric vehicles and plug-in hybrids. That is when we will hybridize the W12 — or not. The big question is whether we can implement this in the W12. The W12 is the most efficient 12-cylinder engine ever produced, a true work of art. But the EU 7 emissions standard will be very difficult for the 12-cylinder. This is a real challenge. And EU 7 will apply from 2025/26, and that is exactly when we switch to plug-in hybrid. This is critical timing for the 12-cylinder.

Your first full-electric model is due in 2025. Can you tell us something more about it?

It’s still too early to go into detail. But whichever model it will be, whether it is the Bentayga or any other model, it will be a true Bentley, with the status, size and technology you would expect from a modern Bentley. And it will be commensurately priced.

What platform will you use? VW Group’s MEB mass-market platform, The PPE (Premium Platform Electric) platform that is being developed jointly by Audi and Porsche or even Audi’s new Artemis AV architecture?

Certainly not the MEB. We cannot say more yet. What is important to us is that the platform for our first electric vehicle must be future proof in terms of autonomous driving, connectivity and electrical capabilities. It is therefore ideal for us to be involved in the development process from the very beginning and to be able to help define the new architecture, and not just become users of something that has already been partly developed.

To increase such technical sharing Bentley will be overseen by Audi within VW Group, moving from Porsche’s current oversight, sources have told Automobilwoche. Have you spoken with Audi CEO Markus Duesmann about Bentley’s future role in the Audi family?

You haven’t talked to Duesmann? Or just not about this topic?

I often talk to Markus Duesmann, and also to [VW Group CEO] Herbert Diess. But I will not say anything about the discussions now. This is an internal matter. This is an opportunity for us. So far we have two partners: Porsche and Audi. Depending on how Porsche and Audi’s PPE joint architecture develops and who takes the lead, it could make sense to move closer to one or the other partner. This is not a strategic decision for us, it is a pragmatic solution for finding synergies within the group. This is a very open discussion. We see it very positively, in whatever direction it may go.