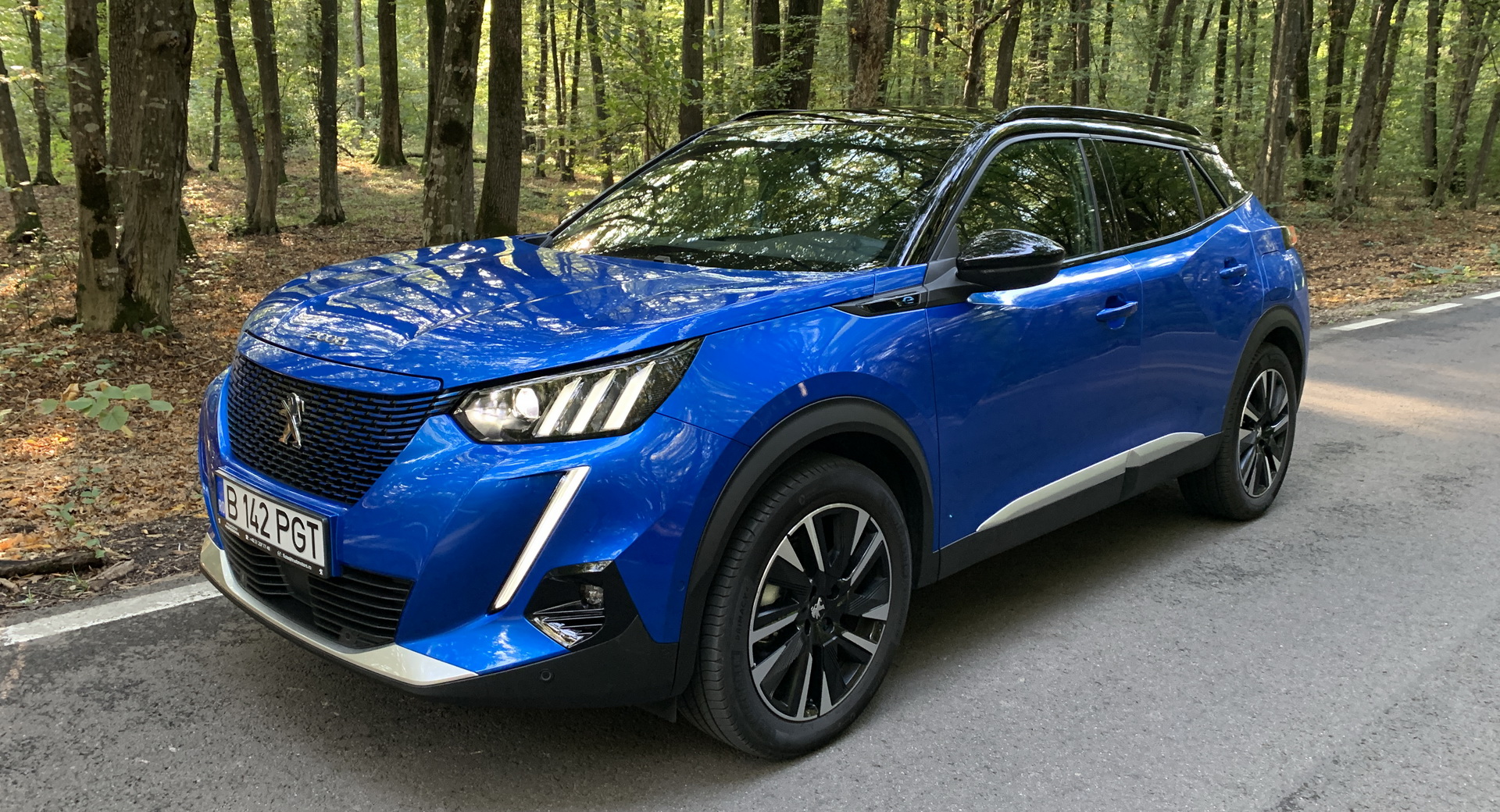 If there’s one car the PSA Group should consider shipping to the United States, along with their Peugeot 508 sedan and the 3008 SUV, it would be the e-2008.

It’s a small crossover, about the same size as a Hyundai Kona, powered by a 100 kW (134 HP) electric motor and a 50 kWh battery. Mind you, it isn’t an ideal EV by any means. Its range is decent but not great, and it shares the same architecture as its internal combustion-engined siblings. It’s also not particularly fast, but it gets the job done (more on that later).

Starting off with its appearance, it’s hard not to like the styling, although this pretty much applies to most modern Peugeots. It’s an aggressive design, with a lot of angular shapes and dynamic light signatures. In this case, the front end looks like it’s projecting a pair of claws and two fangs. 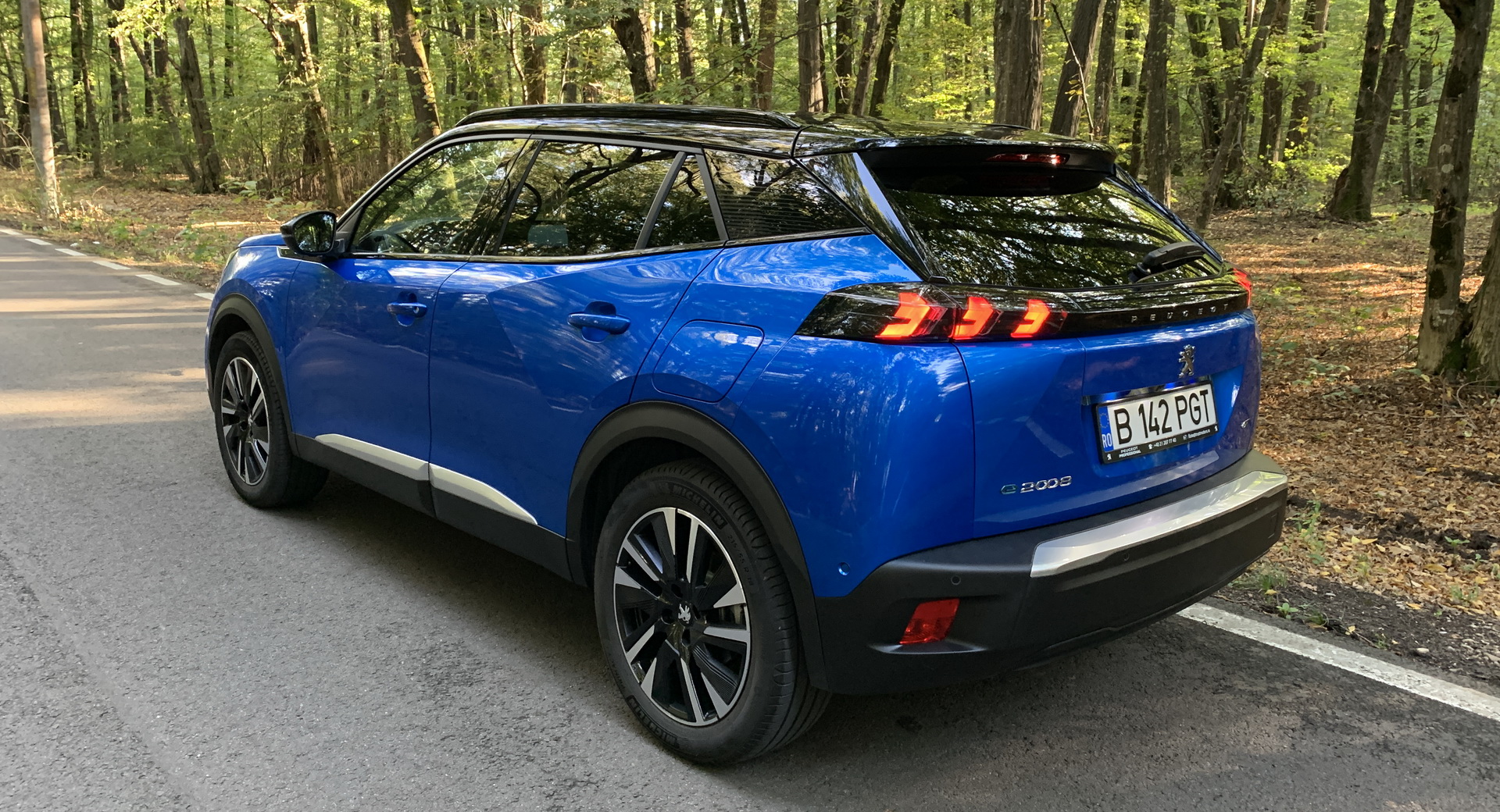 Our test car was a GT spec model, with a Vertigo Blue exterior, featuring a black roof, chrome elements, 18-inch wheels, tinted windows and a body-color front grille. This is definitely a youthful-looking vehicle and, depending on their lifestyle, it might even suit a small family in certain markets.

At 4.3 meters (14.1 feet) long and 1,77 m (5.8 feet) wide, the e-2008 is fairly compact and not too cramped. You do need to watch your head when you get in though if you’re 6 feet or taller, because that roofline is pretty low. You do get used to it, but the first couple of times you get in, you may even smack your head against the roof, as I shamefully did.

The wheelbase measures 2.6 meters (7.54 feet), almost the same as you get in something like a VW Golf hatchback, so again, this isn’t a terribly small crossover, as two adults can definitely sit in the back in sufficient comfort as long as they’re not very tall.

Trunk space isn’t bad either, with 405 liters (14.3 cu.ft) at your disposal. That should be enough for two mid-size travel bags, plus various other items.

Modern interior, but there are some issues

The e-2008, like the regular 2008, comes with Peugeot’s i-Cockpit dashboard, or more specifically the i-Cockpit 3D version, which brings all vital information on the digital gauge cluster closer to your line of sight. It’s a nifty trick, but it really depends on how you set up the display itself. 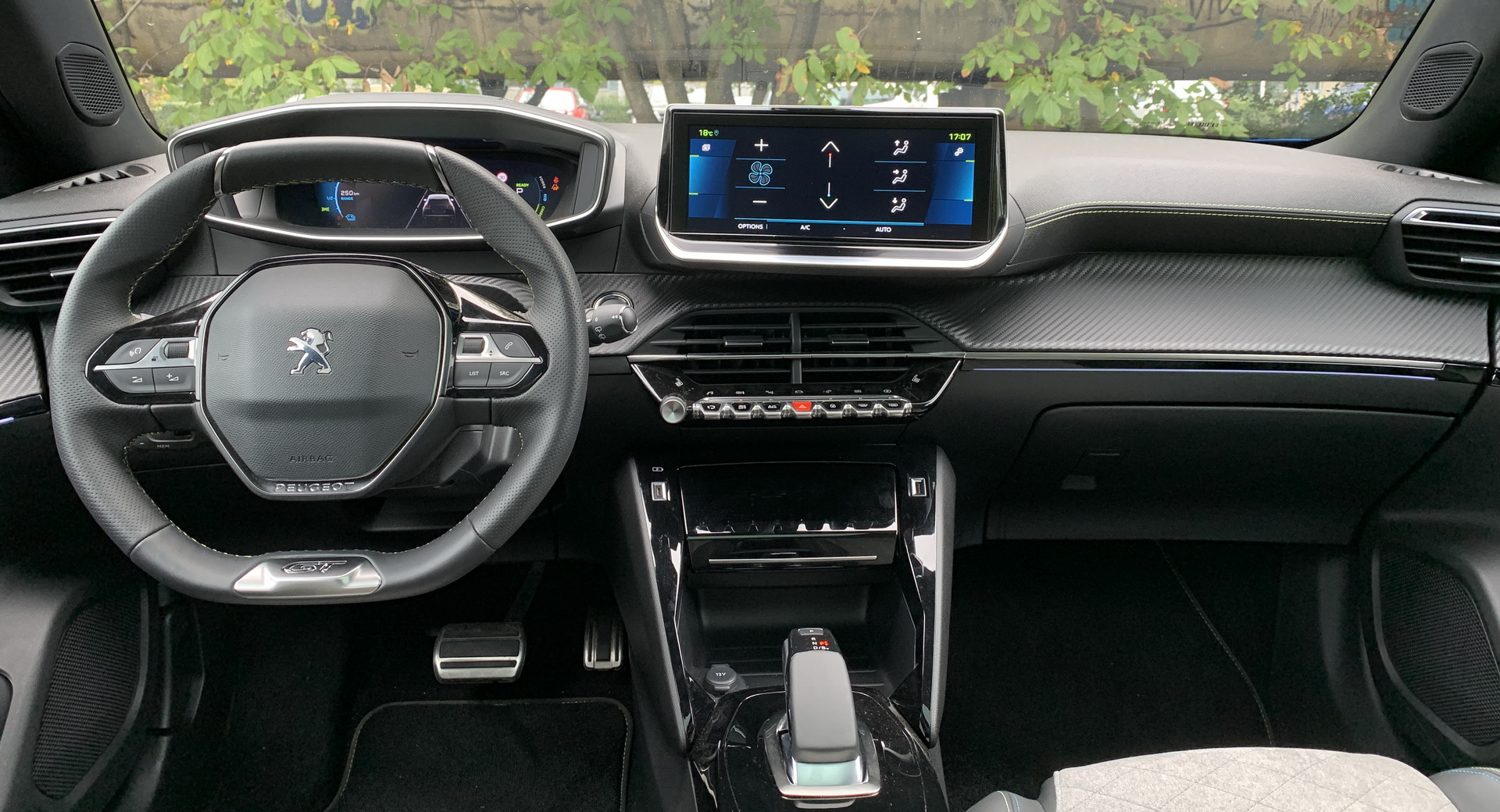 For example, one setup moves your speedometer to the right, overlapping the transmission indicator (P,R,D). People with motion sickness might take some getting used to staring back and forth at a constantly changing 3D figure while driving.

I also found that striking an ideal balance between the sitting position and keeping the i-Cockpit’s gauge cluster perfectly visible is really difficult. It sort of depends on your body type and this is certainly not the first modern Peugeot to have this issue.

Otherwise, the interior makes for a nice place to spend time in, especially if you can get a well specified variant. This one had Alcantara upholstery, 10-inch touchscreen, automatic climate control, a leather steering wheel, adaptive cruise control, ambient lighting and more.

How good of an EV is it?

The Peugeot e-2008 doesn’t sit on its very own dedicated electric architecture like, say, a Tesla Model 3. It doesn’t feature a frunk (the electric motor sits high up where the combustion engine would be) and so not all of its electrical bits are stored in the floor for a very low center of gravity. 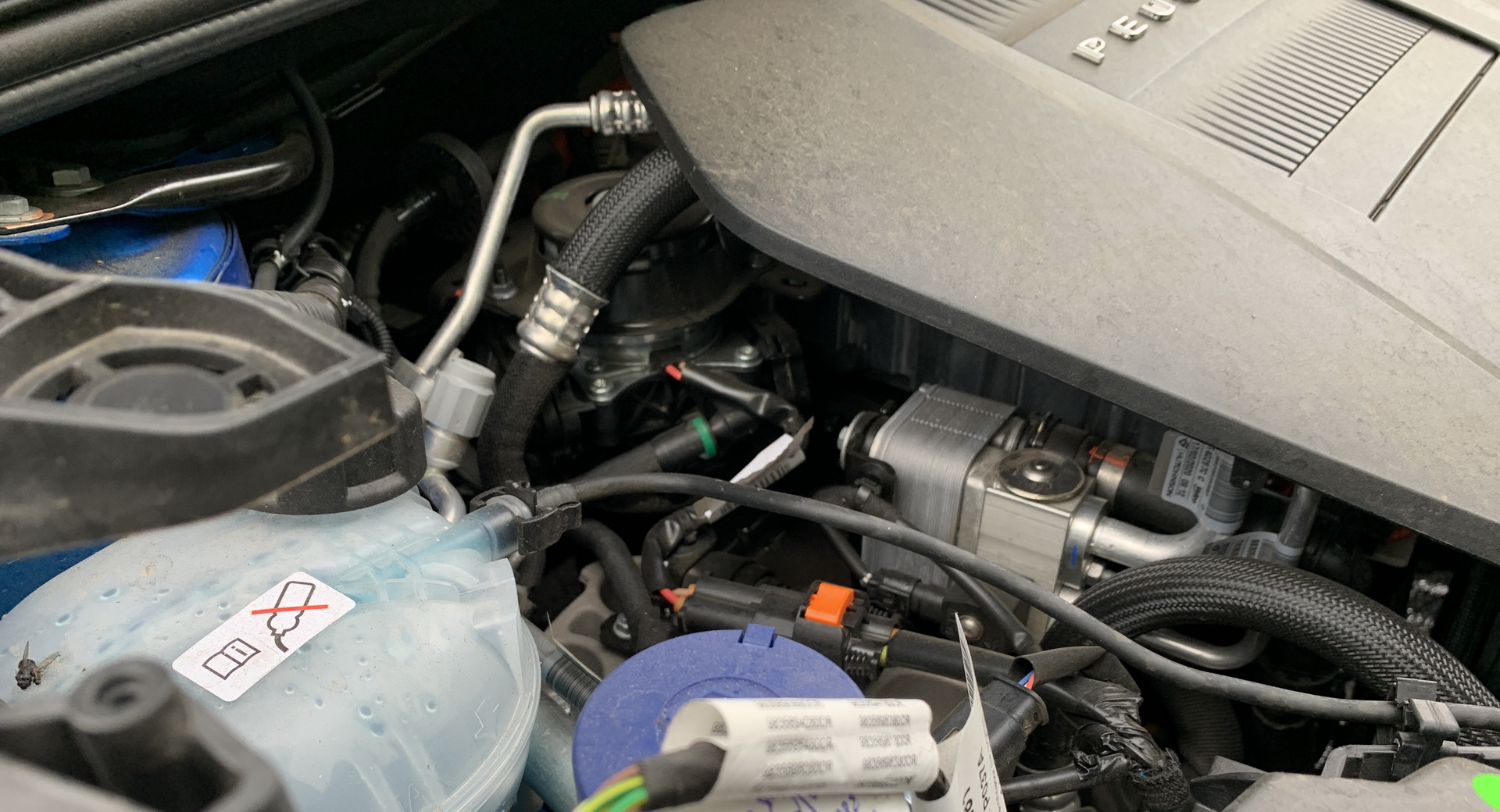 This means that it drives a lot like a regular, front wheel drive, front-engined small crossover, so, for example, flooring the throttle will result in the nose of the car pitching upwards due to the instant torque. It’s kind of funny, if you stop to think about it.

On the plus side, the e-2008 doesn’t wobble around, feels planted, grippy and its steering is surprisingly precise. Once you overcome the slight hint of understeer, you’ll find this to be a remarkably sporty little vehicle – certainly much more fun to drive than its internal combustion engine siblings.

It’s also reasonable quick, with a zero to 62 mph (100 km/h) time of 8.3 seconds. The instant torque definitely helps, especially around town. You almost feel as though you’re in a “mildly” hot hatch, as long as you don’t keep the throttle floored beyond 62 mph. Once you cross that threshold, the e-2008 starts running out of punch if it’s high-speed overtaking you want. Its top speed is 150 km/h (93 mph), which it reaches about as well as a normal entry-level family hatchback with 100 or so horsepower.

This brings us to range, and this is where it gets a bit tricky, because while you can “theoretically” travel 200 miles (322 km) on a single charge in the WLTP cycle, you’ve only got a 50 kWh battery, so those 200 miles are what you might call a “beyond best case scenario”. If you fancy spirited driving even the slightest bit, you’ll probably need to charge your e-2008 once every 3-4 workdays – and you’ll need fast charging (which isn’t available everywhere) in order to top the battery to 80% in about 30 min or so.

Probably not, but it’s a pretty good car overall. Supremely easy to drive, with a comfortable ride, reasonably nippy and modern-looking. The price is interesting too, but we wouldn’t recommend getting the flagship spec as you’d be approaching Tesla Model 3 territory in some EU countries. 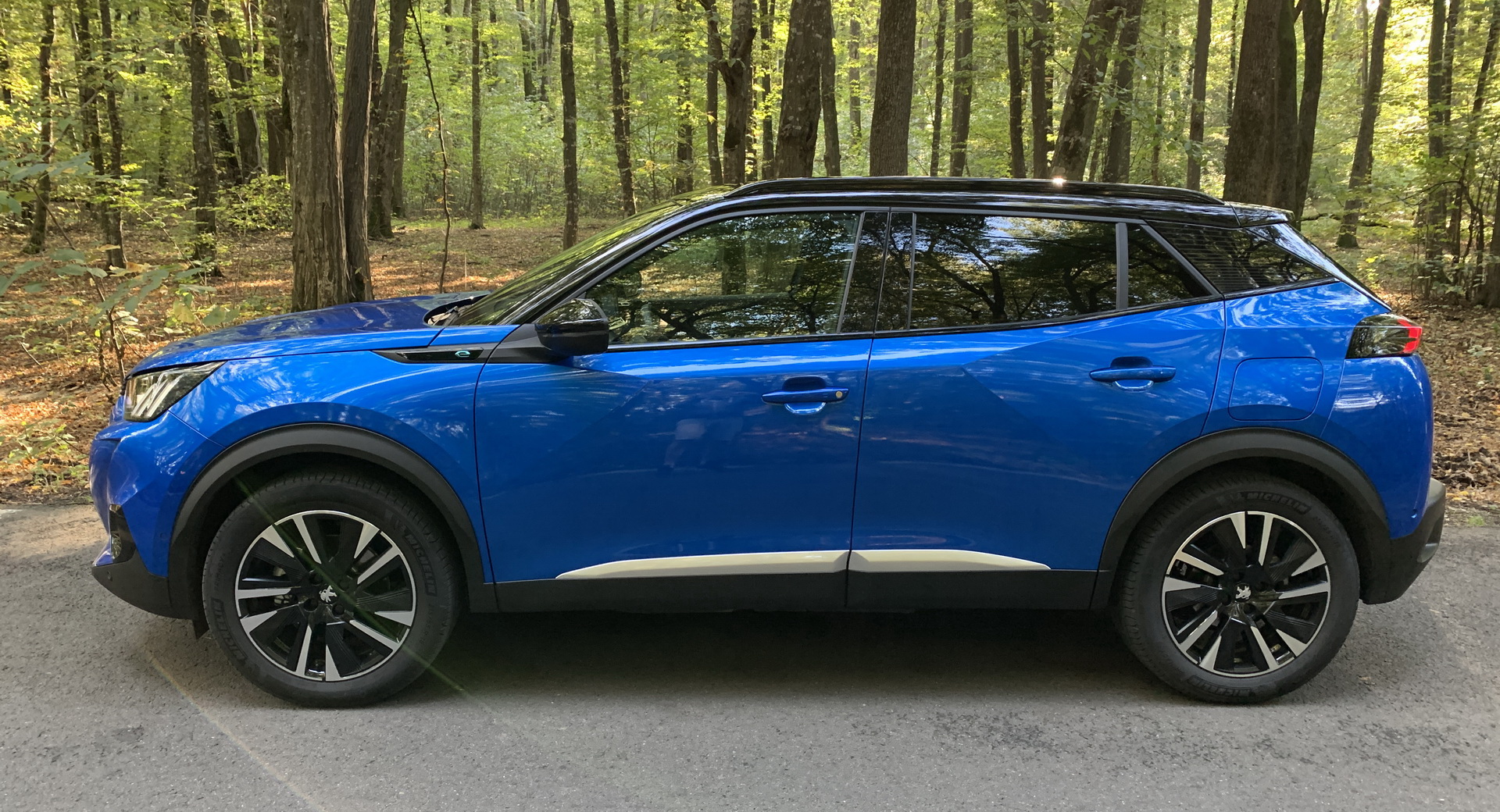 Would it make sense in the U.S. though? Perhaps, if competitively priced. Unfortunately it’s hard to say if it will ever make the trip over.

Everywhere else, if you don’t need anything bigger, opting for it pretty much beats getting any of its internal combustion-engined siblings; the e-2008 is definitely the one to have.

Hacker Finds Way To Substantially Reduce GTA Online’s Loading Times
What to expect from Stellantis in 2021
Why Aston Martin’s CEO is confident that turnround will succeed
See All The Differences Between A 2020 Tesla Model Y And 2021 Model Y
Stellantis targets profit margin of 5.5% to 7.5% this year