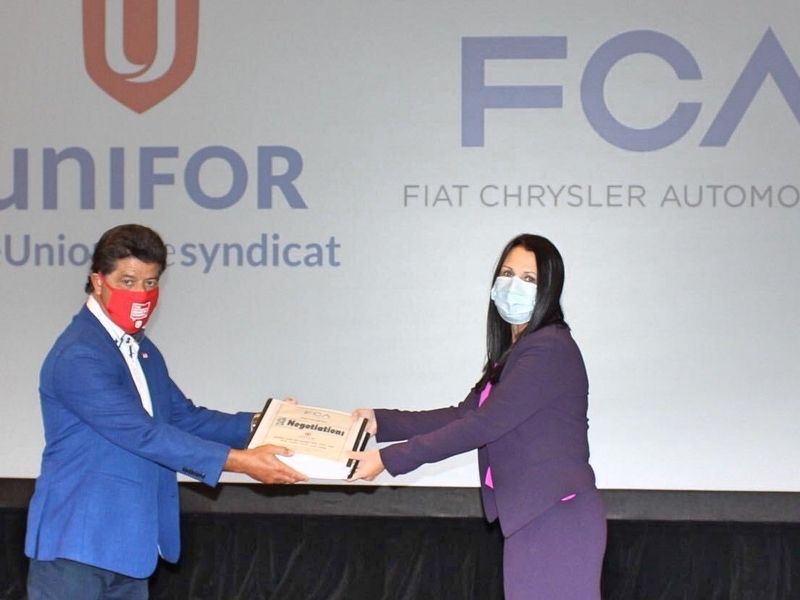 Editor’s note: All currency figures in this story have been translated from Canadian dollars to U.S. dollars at current exchange rates.

Fiat Chrysler Automobiles workers represented by Unifor ratified a new three-year contract that includes up to $1.2 billion in planned investments in Canada, the union said Monday.

Negotiations with General Motors Co. will kick off in Toronto on Thursday, according to GM and Unifor. Unifor President Jerry Dias said a strike deadline was set for Nov. 5, but a spokeswoman for GM Canada said a deadline had yet to be “officially confirmed.”

The union said 78 percent of FCA voting members cast a vote in favor of the agreement during virtual ratification voting that ran from Sunday through Monday morning.

“Workers who have feared plant closures and job losses in recent years can now look forward to a bright future with good jobs for years to come,” Dias said in a statement.

In a statement, FCA said the contract demonstrates the company’s commitment to remain the “leading automobile employer in Canada.” The company employs more than 8,400 workers in Canada and has invested $3 billion in Canadian manufacturing over the last decade, according to FCA.

“This agreement bolsters our global competitiveness and positions us for future growth with new product investment and new jobs, while also demonstrating our commitment to our employees, their families and the communities we represent,” FCA North America COO Mark Stewart said in a statement.

The contract includes a plan by FCA to invest between $1 billion and $1.1 billion in its Windsor minivan plant across the border from Detroit to manufacture plug-in hybrid or battery-electric vehicles on a new platform, which FCA called a “multi-energy vehicle architecture.” According to a letter from FCA to Unifor that was included in a contract highlights brochure, FCA tied the investment to the deal’s ratification, as well as to financial support from the federal and Ontario governments.

In a statement, FCA said it worked “in collaboration with Unifor as well as both the federal and provincial governments” in committing to the Windsor investment.

“We are pleased to see that Unifor members have ratified their agreement with FCA Canada Inc.,” said a statement from John Power, spokesman for Navdeep Bains, Canada’s minister of innovation, science and industry. “Canada is well positioned to become a leader in electric vehicle and battery production. Developing domestic manufacturing in electric vehicles will position Canada’s auto industry as a global leader in a growing market, and help us achieve our climate ambitions.”

A request for comment from the Ontario government wasn’t immediately returned.

Dias said on Thursday that the union and automaker were in discussions with the government about that support, though no indication has been given about the amount of funding being discussed. The federal and provincial governments combined to give Ford Motor Co. $448 million for its planned $1.4-billion investment in its Oakville assembly plant for electric vehicle production starting in 2026.

Production of the new vehicle in Windsor would start in 2024, and it would run alongside the Chrysler Pacifica and Voyager minivans already assembled there. It is not yet clear what the vehicle will be, though Dias said the new FCA platform could support assembly of cars, crossovers or pickups, depending on market demand.

The investment could result in up to 2,000 additional jobs at the FCA Windsor plant by 2024, welcome news for the union following the end of third-shift production there earlier this year. Slumping minivan sales led to the cut, which cost about 1,500 workers their jobs and made securing new product a top priority for Unifor leaders during bargaining.

About 425 workers who remain on layoff from the third shift cut will be recalled when new production, according to the union. Unifor expects the third shift to return by 2024, following about 38 weeks of ramp-up that would begin in 2023.

The planned investments in Windsor and Oakville show that auto manufacturing has a bright future in Canada as automakers roll out new EVs and hybrids, Dias said.

The FCA contract also includes $38 million in investments for the Brampton assembly plant, which assembles the Chrysler 300, Dodge Charger and Dodge Challenger. According to the union, FCA has committed to continue building those cars during the life of the agreement. The automaker also plans to launch three variants of the Charger and Challenger during the life of the agreement.

FCA also committed in the contract to investing about $11 million in its Etobicoke Casting Plant in Toronto.

The contract, modeled after the Ford deal, includes raises, more than $8,300 in bonuses and a reduction in the length of the wage grow-in period for new hires. The contract also reinstates the 20 percent wage differential between production and skilled-trades workers, and includes a wage adjustment to put FCA workers on par with those at Ford.

According to a post on Unifor Local 444’s Facebook page, 86 percent of production workers in Windsor voted in favor of the agreement, along with 89 percent of skilled-trades workers there. Results were not immediately known for Local 1285, which represents workers at Brampton Assembly, or at other FCA Unifor locals.

Unifor now turns its attention to GM. The GM talks will cover the automaker’s St. Catharines, Ontario, engine and transmission plant, a parts distribution center in Woodstock and the new aftermarket parts operation in the company’s former Oshawa assembly plant. About 1,600 hourly workers are employed at those locations, according to GM.

Dias said the union’s top priority in negotiations is “stabilizing” the St. Catharines plant and adding new production there. According to GM’s website, the plant builds engines and transmissions for various models, including the Chevrolet Silverado and GMC Sierra pickups, the Chevrolet Camaro sports car and Chevrolet Equinox crossover.

He said the union will also look for GM to grow its footprint in Oshawa. Vehicle assembly ended in Oshawa in 2019, following a lengthy dispute between the union and the company. The factory is now home to a much smaller aftermarket parts operation.

“You’ve got this incredible paint shop there. We should talk about utilizing it,” Dias said. “It’s worth hundreds of millions of dollars. We’ll see. I’m not making any outlandish predictions. I’m not going to say anything foolish. I’m really just looking for a solution with General Motors about how we move forward and enhance the footprint in Canada.”

He hopes the willingness of the federal and provincial governments to support auto investments will help to convince GM to invest in its Canadian operations.

“GM sees that both the federal and provincial governments are on the same page, which is a first for us,” he said.

Talks with GM follow the dispute between the two parties over the Oshawa plant in 2018 and 2019. In early 2019, Unifor waged a campaign against GM in protest of that decision that included taking out advertisements in Canada and the United States, launching a boycott of GM vehicles made in Mexico and members forming a blockade around GM Canada’s Oshawa headquarters, among other actions.

This year’s talks also follow a month-long strike at CAMI Assembly in Ingersoll in 2017, as well as a 40-day U.S. strike against GM by the UAW in 2019.

CAMI, which builds the Equinox, is on a separate contract that expires in 2021.

Three Ferraris Crash Into Each Other On Philadelphia Highway
Is The Targa 4S Heritage Edition The Sweet Spot Of The Porsche 911 Family?
Tesla’s Robotaxi network could be more profitable than expected: ARK Invest
Apple hires former BMW executive for its rebooted car project
Turn back time with this retro 2021 Ford F-150