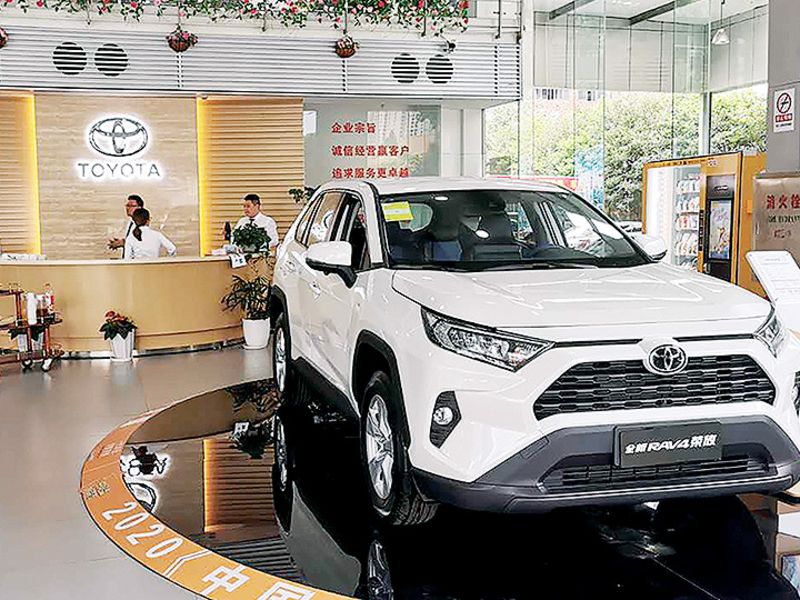 SHANGHAI — Visiting dealerships in China these days, you can’t help feeling a sense of euphoria.

Even as COVID cases in the United States rise again, China’s automotive retail market is showing every indication that it is returning to a pre-pandemic reality.

Take the cluster of dealerships on Wuzhong Road in southwest Shanghai.

In February, immediately after the coronavirus spread from Wuhan to the rest of China, dealership employees donned face masks, even though there was virtually no showroom traffic.

Now, eight months later, several salesmen at the row’s BMW dealership could be found last week out for an afternoon break, smoking and laughing — and most notably, not wearing face masks.

Salespeople at the nearby Toyota store could be seen chatting merrily. They had good reason. Because of robust sales, the dealership has run out of inventory, said Zhang Feng, a sales consultant.

“A customer has to wait for three months after placing an order for large crossovers like the RAV4, and about one month for other Toyota models,” he said.

The good old days appear to be back in the world’s largest vehicle market, mask-free and showing signs of growing sales.

It has been touch and go all year.

New-vehicle sales across China tumbled 42 percent in the first quarter of the year after the halt in production and distribution because of the pandemic. Although the market flickered back to lifein April, the mood of the industry remained pessimistic.

The China Association of Automobile Manufacturers predicted in May that the overall market would still shrink by 10 to 20 percent this year, citing weak overseas demand for China-made vehicles.

That pessimism eased with the release of September and third-quarter sales data.

Overall new-vehicle sales by automakers operating in China advanced 17 percent to nearly 2.6 million in September, with year-to-date volume down 6.9 percent to roughly 17.1 million.

Strong sales were recorded across the board last month.

Benefiting from a massive investment initiative by the national government to spend on domestic infrastructure projects, sales of new commercial vehicles including trucks and buses surged 40 percent to some 477,000.

Deliveries of new light vehicles, including sedans, crossovers, SUVs, multipurpose vehicles and minibuses, rose 8 percent in September to approach 2.1 million, according to CAAM.

Toyota was the best performer among global mass-market brands in China in September. Sales for the Japanese brand shot up 47 percent to nearly 166,000 on demand for products based on its new global architecture, which include the Avalon, Corolla and Levin sedans as well as RAV4 and Wildlander crossovers, according to numbers released by its joint ventures in China.

General Motors’ China deliveries kept recovering. After a 43 percent plunge in the first quarter and a 5.3 percent slide in the second quarter, its local sales gained 12 percent in the third quarter to top 771,400.

There was particular demand for the Cadillac brand, Buick-badged crossovers and SUVs, and no-frill light vehicles marketed under the Wuling brand, the Detroit automaker said last week. GM discloses only quarterly sales numbers.

Demand for luxury vehicles was also running strong. Most luxury brands posted double-digit sales growth for the third quarter. Cadillac deliveries jumped 28 percent to more than 65,000 in the period, while sales of BMW and Mini brands surged 31 percent to top 230,000.

With market recovery exceeding its expectation, CAAM last week revised its forecast and predicted the decline in China’s new-vehicle sales this year will be narrowed to around 4 percent.

The industry body attributed the faster-than-expected market recovery to the resumption of live auto shows, promotional events and favorable government policies, such as a vehicle scrappage program and subsidies for new-vehicle sales.

Small outbreaks have sporadically surfaced in some Chinese cities, including Beijing. The outbreaks were quickly contained after local governments moved fast to lock down affected areas and ramp up tests.

As new rivals enter EV segment, Tesla’s share of registrations drops
Tesla China-made car sales continue climb back toward record
Tesla Superchargers estimated to make $25B+ in annual revenue when opened to other EVs
Musk says India plant likely if Tesla succeeds in importing cars there
The Fiat Multipla Might Just Be The Quirkiest Car Ever Made