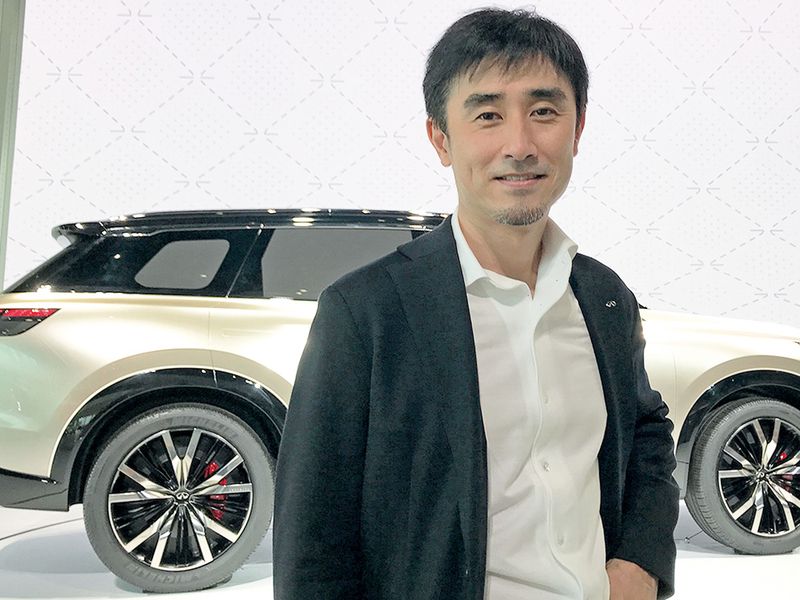 TOKYO — Infiniti’s new global design chief is putting his own stamp on the look of the lineup, starting with a fresh aura for the QX55 and QX60 crossovers arriving next year.

Among the styling changes will be ditching the so-called “crescent cut” kink in the rear pillar.

“How to modernize Infiniti is a big task we are taking on,” Nakamura said at a recent walk-around of the QX60 Monograph, a close-to-production design study of the next QX60. “This is showing one part of the shift from the current generation to the future generation.”

With future crossovers, the goal is to imbue a sense of power and muscularity. That is balanced with Japanese minimalism, which derives from a hint of “beauty in imperfection,” Nakamura said.

Perhaps the most notable change will be the jettisoning of Infiniti’s crescent-cut C-pillar.

The arrow-shaped notch has been a signature Infiniti design cue for years. But stylists will dump it to achieve better visibility and a sense of spaciousness in the rear, especially in crossovers.

The QX60 Monograph, for instance, gets an open-notch effect in the rear pillar that creates a floating-roof look and generates the appearance of a longer, sleeker cabin.

Infiniti will also accentuate so-called piano key lighting in the front and back. The tooth-like light elements sequentially light up in a look similar to keys of a piano. The use of wraparound tail lighting, meanwhile, may also be expanded to lend a solid, planted stance.

Among the features staying will be Infiniti’s trademark double-arch grille.

Nakamura took the reins of Infiniti design last year following the departure of Karim Habib. Habib, whom Infiniti poached from BMW, led the brand for barely two years before he left to become global design chief at Kia Motors Corp. shortly after the management shakeup that followed the arrest of Nissan Chairman Carlos Ghosn.

Nakamura had already taken a leading hand in penning the futuristic next-generation styling seen in such concepts as the QX Inspiration crossover and Prototype 10 open-cockpit racer.

During an assignment as design director at Nissan Design Europe in London, Nakamura led a number of other programs, including the Infiniti Emerg-E sports car and Q30 hatchback concepts, as well as the Nissan Qashqai and Nissan Gripz concept.

Other works for the Nissan brand include the Nissan IMx crossover concept, and design development of the new Sentra sedan.