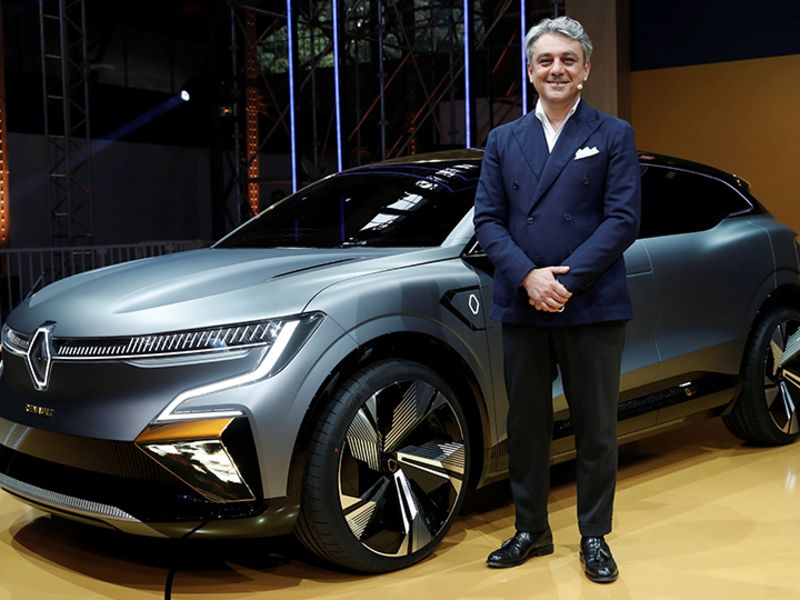 PARIS — Renault will launch its next generation of electric cars with a compact hatchback, moving up a segment from the Zoe and using a new Renault-Nissan alliance platform developed for battery-electric vehicles.

Renault CEO Luca de Meo on Thursday showed a concept called the Megane eVision, a show car that he said was “95 percent” of what the production version would look like. Output of the car will start by the end of 2021 in France, he said.

De Meo’s turnaround plan for the struggling automaker is focused on moving away from smaller, cheaper cars — where Renault has been a market leader — toward profitable, larger models and growing segments.

He said in an online news conference that Renault chose the show car’s name to reflect how the original Megane (and Scenic variant) helped save Renault from financial difficulties in the 1990s, along with the reinvention of Dacia under Renault ownership.

Compact hatchbacks are “by far the most popular car in shape and size in Europe,” and there about 100 million people driving compact vehicles in the region, de Meo said, calling the Megane eVision a “reinvention” of the segment.

The new compact EV will be built on Renault-Nissan’s CMF-EV platform, which pushes the wheels toward the corners and has a flat, lower floor to accommodate the batteries. Another advantage, Renault says, is that short front and rear overhangs create a larger passenger compartment.

The Megane eVision has a thinner, 60 kilowatt-hour battery that acts as a structural element and that contributes to an aerodynamic design that Renault says reduces wind resistance and optimizes electric range.

Renault says the Megane eVision, at 4,210 mm long, is 15 to 30 cm shorter than most compact hatchbacks, but has the same amount of interior space. The current internal-combustion Megane is 4,360 mm long and the class-leading Volkswagen Golf is 4,284 mm long. A potential EV competitor, the VW ID3, is about 4,260 mm long.

Renault also used the event to show the Dacia Spring, an electric minicar that de Meo said would be the “cutest, most affordable” EV in Europe. The Spring is a version of the Renault K-ZE developed for the Chinese market in 2019. The K-ZE is based on the Renault Kwid.

The Spring will go on the market early next year aimed first at urban car-sharing operations. By the third quarter the car will be available to private customers. No price was announced.

Renault was an early mover in EVs with the Zoe small car, which has been on the European market for eight years and was the best-selling EV through the first half of 2020. Renault, however, is facing mass-market electric competition from PSA Group, which is releasing full-electric versions of Peugeot, Opel and Citroen models; Hyundai/Kia; and especially VW, which is releasing the ID3 and ID4 crossover.

The Megane eVision draws styling elements from the Renault Morphoz concept shown earlier this year, including large SUV-styled wheels; short overhangs and steeply raked windshield; higher, crossover-style hoodline; and a front end that largely does away with the traditional grille.

“We fully leveraged the potential of a pure electric platform with wheels at the corners and a short hood,” de Meo said. “We reinvented the classical hatchback in an emotional way.”

Driving A Lamborghini Diablo SV Is Not As Demanding As You Might Have Thought
Jaywalker Hit With A Healthy Dose Of Karma After Flipping Off Driver
Instagram Influencer Arrested After Crashing His Lamborghini Aventador Into Skoda Killing Its Driver
Tesla is being irresponsibly covered by mainstream media
Green Deals: Sun Joe 2800PSI Electric Pressure Washer $200, more