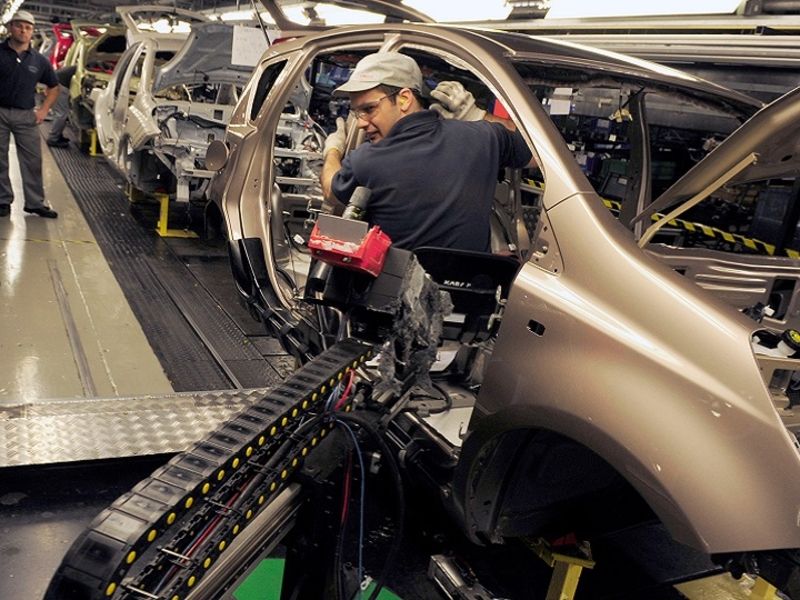 LONDON — Automakers with UK production will not be able to count components from countries such as Turkey and Japan toward a content threshold in a trade deal with the European Union, reports said.

Nissan and Toyota, which have car factories in England, likely will be affected by the decision.

The EU will not accept non-EU parts being combined with EU and British ones to meet a roughly 55 percent level for local content, a source, who spoke on condition of anonymity, told Reuters.

The BBC also reported the EU’s stance. In a letter to the British car industry seen by the BBC, the UK’s chief Brexit negotiator David Frost said the European Commission has rejected Britain’s request for what is known as “third country cumulation” to raise the percentage of parts labeled as British in cars exported from the UK.

“The Commission has made it clear it will not agree third-part cumulation in any circumstances, which we regret but obviously can’t insist on,” Frost wrote in the letter.

The ruling means cars exported to the EU from the UK could face tariffs under rules of origin agreements, regardless of whether the UK agrees a free-trade deal with the EU.

Frost’s letter singled out Turkey and Japan, two key countries outside of the EU that supply parts to the UK.

Japan was the fourth largest supplier of automotive parts and accessories to the UK by value in 2019, after the EU, U.S. and China. Parts from Japan totaled 458 million pounds in 2019, while those from Turkey reached 306 million, figures from UK industry association SMMT show.

By not allowing the UK to categorize foreign-supplied parts as British, the EU could then apply tariffs to UK cars on the basis that the rate of locally sourced content is too low. These so-called rules of origin are designed to avoid helping a third country.

The locally sourced parts content of UK built vehicles is around 44 percent according to 2017 data from the SMMT, although this figure is likely to be drastically reduced now as automakers are forced to look overseas for battery supplies for electrified vehicles.

Standard EU rules say that local content should reach 45 percent before vehicle can be imported tariff free in a free-trade agreement. The UK has been pushing for electric vehicles to be classified as British, but has also been rebuffed on that too, the BBC reported.

While the content dispute will not lead to tariffs on automakers with high domestic and European sourcing, it would affect Japanese companies such as Nissan, which brings in more content from elsewhere than some of its peers.

“We want our UK team of 7,000 people to have the best possible chance of future success,” Nissan, which operates Britain’s biggest car factory, said in a statement.

There is a particular risk around electric cars with key elements, such as batteries, sourced from outside the bloc.

Toyota is also worried about how rules of origin will affect its UK manufacturing.

Toyota builds the Corolla and the related Suzuki Swace compact cars in its plant in Burnaston, central England.

Van Zyl estimated local content of cars built in Burnaston at around 30 percent. Parts sourced from Japan include the hybrid battery, which the executive said was a “substantial” part of the car’s value.

Toyota sources parts from Turkey. “Turkey over the years has become quite a big components player,” Van Zyl said.

Key parts from Turkey include tires, lead-acid batteries and wheels. Data from Turkey’s investment agency shows the UK is the country’s fourth largest market for automotive components after Germany France and Italy. Bosch is the country’s biggest automotive supplier by revenue according to 2017 data, followed by Bridgestone tire maker Brisa and Japanese electrical component supplier Yazaki.

Turkey is outside the EU, but the UK currently trades tariff free with the country because of Turkey’s customs union with the EU.

Honda is also likely to be affected, although the automaker has said it will close its plant in Swinton, which builds the Civic compact car, next year.

The SMMT has previously drawn attention to the importance of maintaining the relationship with Turkey thanks to UK’s strong automotive trading links with the country. In 2018, 31 percent of Britain’s engines were exported to Turkey, largely diesel engines from Ford’s Dagenham plant heading to the company’s Transit plant there. The Turkish-built Transit meanwhile is the UK’s biggest selling van.

The SMMT said the British government is failing to prioritize the country’s auto industry despite it being the biggest exporter of goods by value.

“Given its importance to the economy and livelihoods and the damaging consequences of tariffs, we need the sector prioritized in negotiations, not traded off against other industries,” SMMT CEO Mike Hawes, said in a statement.

The BBC’s report said that the UK wants to prioritize fishing rights over the auto industry. Although it is a much smaller industry, it is one that carries a bigger political significance.

A spokesman for Prime Minister Boris Johnson said the British government would continue to work with the auto sector, which employs 800,000 people in the UK.

“Rules of origin commitments exist in all free-trade agreements and as negotiations progress we remain committed to working with the automotive industry to try to ensure an outcome that reflects business interests across the UK,” the spokesman said.

The UK has yet to agree its future relationship with the EU three months before the current interim agreement ends on Dec. 31.

Reuters contributed to this report

2022 Honda Passport preview
Woman Rushing To Cross The Tracks Runs Back And Nearly Gets Struck By Train
Ford Announces Massive EV Investments In Tennessee And Kentucky
Should You Pick The All-Electric Genesis G80 Over The ICE Models?
Automotive News Europe salutes Stefan Fischer