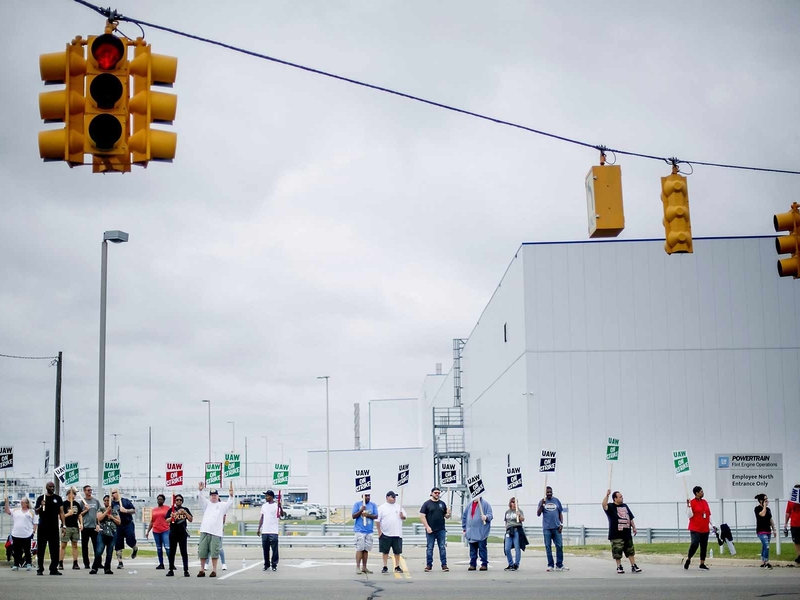 As the UAW strike against General Motors Co. nears a second week, the issues in dispute are similar to those that sparked strikes in the past: health care, wages and the company’s commitment to invest in U.S. facilities.

The conflicts stretch all the way back to Dec. 30, 1936, when GM employees — led by UAW Local 174 President Walter Reuther — stopped production at plants in Flint, Michigan, and Cleveland. They were protesting low wages and conditions that included 12- to 14-hour shifts, six days a week, often in oppressive heat on fast-moving assembly lines. But instead of walking out, they sat down in the factories, and there they stayed for 44 days.

In the ensuing eight decades, there would be dozens of contract negotiations, concessions on both sides and strikes — including the current one that’s sent 46,000 GM workers to the picket lines for the first time in 12 years. Here’s a look back at some of the actions that set precedents in the past.

1937: On Feb. 11, 1937, the sit-down strikes end as GM becomes the first of Detroit’s Big Three automakers to recognize the UAW as the representative of its manufacturing employees. The first contract provides higher wages and improved conditions in the plants. Chrysler also recognizes the UAW after a sit-down strike at its Detroit plants.

May 1937: Trying to organize workers at Ford Motor Co., Reuther and other UAW supporters pass out leaflets on a pedestrian bridge leading to the company’s River Rouge complex in Dearborn, Michigan. Ford security men attack and beat them in a confrontation that becomes known as the Battle of the Overpass. Pictures of the attack by a Detroit News photographer, who smuggles them past the security guards, help spur support for the union, but Henry Ford balks at recognition.

April 1941: A strike at the River Rouge plant halts operations for 10 days. Henry Ford’s wife, Clara, helps persuade him to negotiate with the UAW, and the first contract is signed in June.

1945-46: Reuther, now a UAW vice president and head of the GM Department, wants a 30% pay increase to help workers in the aftermath of World War II. He also wants GM to implement the raise without increasing vehicle prices. The company says no, so Reuther demands that it “open its books” to show it can afford both. GM refuses again and offers the equivalent of a 10% raise, with higher prices. The union rejects the offer and on Nov. 21, 1945, begins what will be a 113-day national strike. President Harry Truman appoints a board to make recommendations based on postwar wage-price policy; the panel says GM can boost pay by 19.5 cents an hour, or about 17.5%, without raising prices.

Ultimately, the company and union agree on an 18.5 cent-a-hour increase. While this is well below Reuther’s 30 percent, the negotiations are “extraordinarily significant,” says Harley Shaiken, currently a labor professor at the University of California, Berkeley, because Reuther puts GM on the defensive and “captures the imagination of the public,” setting the stage for more favorable contracts in 1948 and 1950.

1946: UAW members elect Reuther to be the fourth president of the union.

1948-50: In 1948, GM agrees to increase wages, with future adjustments based on changes in the government’s consumer price index and in national productivity — a deal the New York Times says may set a “pattern for the industry.” A year later, Ford becomes the first U.S. automaker to negotiate a pension plan with the UAW as part of a 30-month contract: $100 a month for each eligible worker. Ford agrees to pay the cost and to administer the plan jointly with the union. Chrysler agrees to the $100 benefit during contract talks but refuses to pay for it until after a strike in 1950 that lasts about 100 days.

The Chrysler agreement covers three years; GM and the UAW will later negotiate a five-year pact that includes a pension plan, along with new and improved medical and other benefits. The provisions in what will be known as the Treaty of Detroit do set the tone for industry contracts for the next 30 years.

1970: Reuther dies in an airplane crash on May 9, and Leonard Woodcock becomes the fifth UAW president. In September, he leads a strike against GM that lasts for 67 days, stopping production across the automaker’s facilities. The final contract includes higher wages, a plan that allows workers to retire with a pension after 30 years and payment of drug and Medicare costs for retirees.

1977: Douglas Fraser becomes the last of the UAW’s founding fathers to serve as president.

1979-81: Fraser leads negotiations with Chrysler on wage and benefit concessions that — along with loan guarantees from the U.S. government and help from lenders, dealers and suppliers — allow the automaker to avert bankruptcy, “We went to the membership for ratification three times in 13 months, and each contract was worse than the previous one,’’ Fraser said in a 2001 BusinessWeek interview. “We really didn’t know if [Chrysler] was going to survive.”

Ford and GM also will ask for concessions in the 1980s, as Japanese auto companies take an increasing share of U.S. car sales and the UAW’s focus in contract negotiations shifts to job security. Meanwhile, the UAW organizes a new Volkswagen assembly plant in Westmoreland, Pennsylvania, that produces small cars. (Slowing sales will cause Volkswagen to close the factory in 1988.)

1982: Honda Motor Co. opens the first Japanese-owned auto plant in the U.S. to build Accord cars. The UAW reaches an agreement with management that the company will remain neutral on a possible unionization vote at the Marysville, Ohio, factory.

1985-86: The Canadian branch of the UAW secedes from the parent union in anger over concessions to GM, Ford and Chrysler. The UAW withdraws its National Labor Relations petition for a unionization vote at Honda’s Ohio plant.

1995: Stephen Yokich, a strike leader whose mother famously pushed his stroller on a picket line when he was 22 months old, becomes the eighth UAW president.

2005-11: Turmoil roils the industry: the Great Recession, soaring gasoline prices, car sales near a 30-year low, plant closings, layoffs, bankruptcies and government bailouts at GM and Chrysler, along with a drastic restructuring at Ford. The 2007 contracts create a two-tier wage system that pays new hires about half what more senior employees earn and shifts billions of dollars in retiree health-care obligations from the auto companies to union-run funds.

In 2011 negotiations, Bob King, elected the UAW’s 10th president the previous year, says workers must be rewarded for the $7,000 to $30,000 each gave up since 2005 in surrendering raises, bonuses and cost-of-living adjustments, along with other concessions. The final agreements provide signing and additional bonuses, higher hourly pay for entry-level employees and other benefits. GM, Ford and Chrysler (now majority-owned by Fiat SpA) commit to adding jobs and investing in American plants. “We made important gains for our members,” King says after GM workers approve their contract.

2014-15: Dennis Williams is elected the 11th president in 2014. In 2015, some rank-and-file members criticize him for accepting a bear hug from Fiat Chrysler Chief Executive Officer Sergio Marchionne at an event to kick off contract talks. Workers overwhelmingly vote down the initial deal Williams signs off on with the automaker — the first such rejection of a national proposal since 1982, according to the Detroit Free Press. Members later approve an agreement that includes greater concessions from the company, including a path to senior-level pay for entry-level workers.

2018: Gary Jones becomes the 12th UAW president in June 2018. In August 2019, FBI agents raid his home and the home of Williams, his predecessor, as part of an investigation into corruption involving the union related to illegal use of training-center funds. A UAW spokesman has called the search unwarranted and said the union is cooperating with the investigation.

Sept. 16, 2019: Some 46,000 UAW workers strike GM over issues that include health-care benefits, use of temporary workers, the tiered pay scale and investment in American operatio

What Do You Think Of This Jeep Liberty Convertible Aka ‘Jeepster’?
Reversing Honda And Chevy Rear-End Each Other In Perfect Sync
VW sees high six-digit number in lost vehicle production
As new rivals enter EV segment, Tesla’s share of registrations drops
Argo AI self-driving cars to join Lyft’s Miami network before 2021 is out