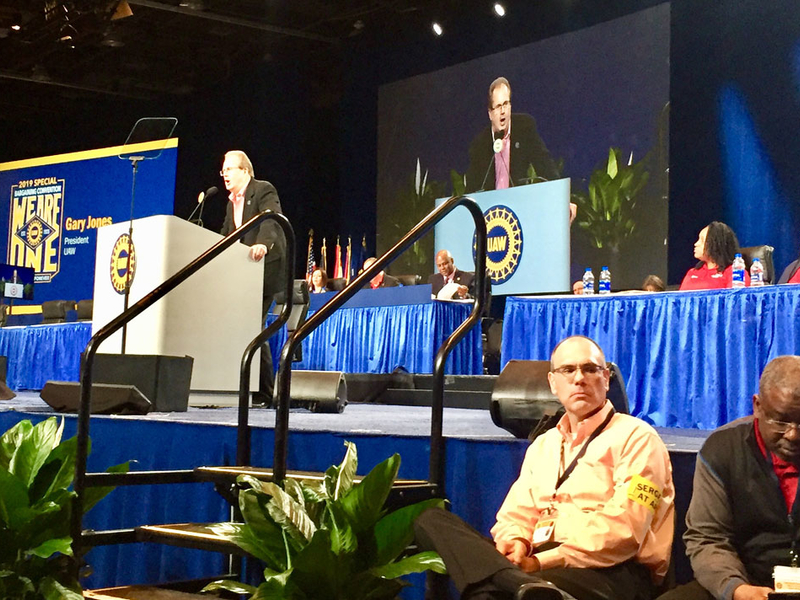 In a closed-door meeting at a Detroit casino two years ago, retiring UAW President Dennis Williams revealed his successor would be Gary Jones, an accountant then running the union’s western region. The resounding reaction among the union brass in the room was: Gary who?

The UAW’s former chief bean counter didn’t strike anyone as a firebrand in the image of the union’s legendary leader Walter Reuther. But the union was the target of a widening federal corruption probe, and the buttoned-down CPA was seen as the antidote to the UAW’s growing image problem.

Now Jones, 62, appears to be in the crosshairs of the investigation, just as the UAW put 46,000 General Motors workers on the picket lines in the first nationwide strike against the automaker in 12 years. The mild-mannered finance man was nowhere to be seen when the union announced the strike on Sept. 15 in Detroit. The already low-profile Jones has been incognito since he was implicated — but not indicted — in a federal charging document this month that accompanied the arrest of UAW regional director Vance Pearson on conspiracy, money laundering, wire fraud and other charges.

Jones, who vowed as president to win back the trust of the rank and file with a clean-slate agenda, instead stands accused of using union members’ dues to finance a “lavish lifestyle” that included long stays in luxury lodgings, golf outings and steak dinners with champagne and cigars, according to the government. Federal investigators, in a raid of Jones’ suburban Detroit home, seized golf clubs and $30,000 in cash.

“If you ask anybody in my plant, ‘What do you think of UAW President Gary Jones?’ they’d start laughing and they’d say, ‘He’s a thief, he’s a criminal, he’s a crook,’ ” said Brian Pannebecker, a forklift driver at Ford Motor Co.’s axle plant in Sterling Heights, Mich. “They don’t know him here in Detroit, other than to know that he’s held a lot of lavish conferences out in Palm Springs.”

The UAW didn’t respond to a request for an interview with Jones. Brian Rothenberg, a spokesman for the union, said last week the allegations against Pearson are “very concerning” but added the UAW believes the government “has misconstrued any number of facts.”

Jones became the union’s 12th president in June 2018. After the surprise selection by Williams, Jones was formally elected during a raucous ceremony at the union’s constitutional convention.

As he stepped on the podium for his acceptance speech, the theme from Rocky blared from loudspeakers while delegates gave him a standing ovation, replete with horns and noisemakers.

“I am here to fight for you,” the bespectacled Jones roared, thrusting a fist aloft. “Knowing our core values, knowing who we are and knowing what the UAW is about could not be more important than it is today.”

After the fiery speech, Jones took questions from reporters for what may be the only instance in his presidency. He wasted little time suggesting the media was to blame for the black eye the UAW was getting from the corruption scandal, which he insisted involved only a few “bad apples.”

“Specific individuals — not institutions like the UAW — are responsible for the betrayals of trust identified by the government,” Jones said, adding that the union had done its own investigation of the misdeeds.

Asked if the union would release the results of its internal probe, Jones replied: “I’ve got to talk to our attorneys.” The union has yet to reveal its findings.

In subsequent public appearances — at the union’s bargaining convention, ceremonial opening handshakes, Detroit’s Labor Day parade — Jones declined to engage with the media. When a Bloomberg News reporter tried to question him at the convention in March, she was blocked by his security.

There is little in Jones’ background that would have prepared him for such scrutiny.

He hired into Ford’s now-shuttered glass factory in Broken Arrow, Okla., 44 years ago. While working and helping his wife, Cindy, raise their two daughters, Jones earned a bachelor’s degree at the University of Tulsa and became a CPA.

In 1990, then-UAW President Owen Bieber tapped Jones to join the union’s international staff in the accounting department. A year later, he became chief accountant and climbed the ranks until he was elected in 2012 to lead Region 5, which oversees locals spanning states including Missouri, Texas and California.

Since arriving in Detroit a year ago, Jones has worked to transform his taciturn nature into the mold of the fist-pounding labor boss.

“We invested in you. Now it’s your turn to invest in us,” Jones told GM CEO Mary Barra as he sat across the table from her during one of the opening handshake events in July. “We are the voice of the American worker, the defenders of the middle class.”

But as the UAW’s scandal spreads, Jones is losing his voice of authority.

“They were already in a situation where trust was damaged with the membership,” Kristin Dziczek, vice president of industry, labor and economics at the Center for Automotive Research, said after Jones was implicated. “This just makes it worse.”