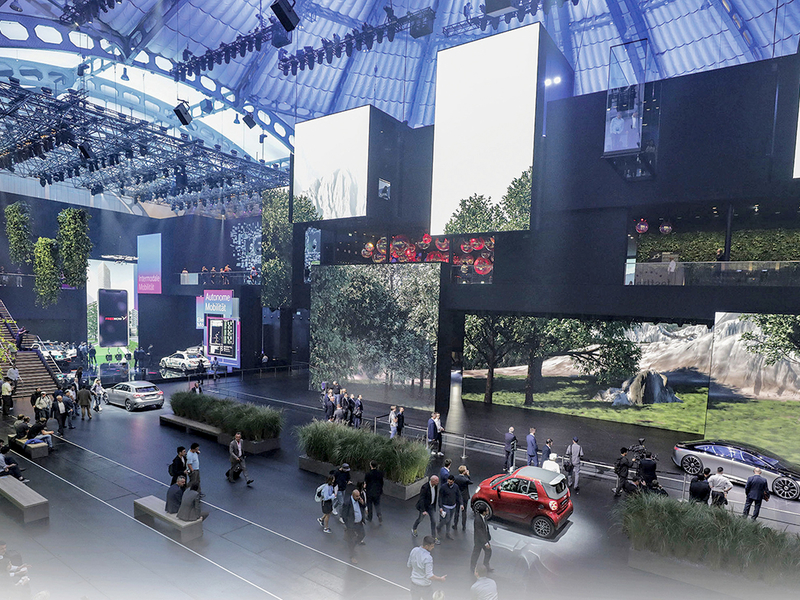 FRANKFURT — You didn’t need to look far to spot a metaphor for this year’s Frankfurt auto show — and perhaps a European industry.

You just had to look up.

During the afternoon of the first press day last week, with the attending automakers squeezed into four halls (with many more halls dark and empty), the ceiling fell in. Literally.

In one corner of BMW’s stand — in a massive structure that the automaker built a decade ago for itself (test track included) but now shares with other brands — the roof of one of the displays caved.

Police were called in. Security investigated for possible terrorism. No one was hurt. But some wondered whether activist German environmentalists were behind a plot to disrupt things. (The fact that it occurred near a full-electric i3 didn’t support that theory.)

Still, it was an unfortunate symbol for a once-significant show.

“The IAA2019 is a huge fail,” tweeted former Opel CEO Karl-Thomas Neumann. “It’s a sad shadow of what it used to be.”

Yes, Frankfurt was not Frankfurt this year. And it was a signal that everything is changing in this dynamic automotive world and a clear warning that no tradition is safe.

It was also a siren indicating that the European — and global — environment remains in a state of flux.

Nearly two-thirds of the world’s car producers were absent. And word on the German street is that Daimler and Volkswagen Group seriously considered pulling out of the show months before its opening. When pressured by the German car association, they remained.

But, in the end, an awe-dropping 24 brands were absent and the number of exhibitors fell 20 percent. And to cap it off, the head of the German car lobby, which hosts the show, abruptly resigned.

Even more worrisome: This is Frankfurt. In prior years, the biennial show has been a bellwether for the European industry.

The refrain has been omnipresent: As Frankfurt goes, so goes the following year. And Frankfurt this year delivered a thud.

And beyond Frankfurt? Germany is on the brink of recession. There is considerable deal/no-deal Brexit fatigue. Italy is a mess politically. And electric cars are about to be jammed into the market at a remarkable rate thanks to 2020 European regulations, consumer indifference be damned.

“There will be a major challenge for next year” concerning electrics, Audi CEO Bram Schot said last week. “You need a consumer willing to pay.”

The cloud of electrification, and its acceptance, hangs over Europe. China’s cooling has chilled the industry, particularly the European premium brands that used China as an escape hatch after 2009. And the European view of the U.S. is, in a word, flat.

But the biggest problem is Brussels.

Governments in Europe continue to have a deaf ear to the automakers’ concern over increased regulation.

“They are hearing, but I am not sure they are listening,” said PSA Group CEO Carlos Tavares.

Of course, the outside forces of the industry are the ones at work, tipping the scales out of balance.

So who gets hurt with a Europe in flux and a Frankfurt out of kilter? Mostly everyone.

Consumers will have less access to what the industry is offering as its traditional gathering place is splintered.

Eventually, there will be a day of reckoning. Parts or maybe all of the global auto industry will be readjusted.

And there is a lot of talk of readjustment — of things that need to change to support a more-savvy consumer in a very traditional model.

Micromobility, sharing and autonomous are no longer the buzzwords. A few years ago, anyone with a podium had a statement about autonomous vehicles. Now, that talk is tempered out to 2030 and beyond.

The only thing constant is change. In every way.

So, for now, the roof looks to be caving in, but the sky above has not yet fallen, and maybe it won’t have to.

This industry — as concerned and unsettled as it may be — will sort out its direction.

Audi’s Schot perhaps said it best: “There will be dancing at a lot of weddings. The question is: What wedding?”